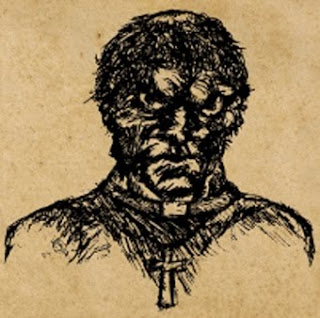 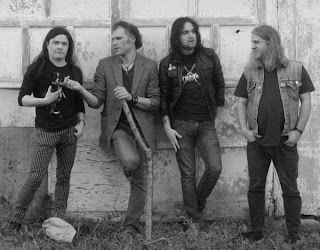 The Lord Weird Slough Feg is a heavy metal/hard rock group from California. The band has been around since 1990, releasing their debut self-titled record back in 1996. Since then, the band has been a bit of an underground hype band that never really blew up, this will be their first record on Profound Lore Records.
This is not an album for people that like atmospheric, technical, progressive, etc. experimental music, this is a record that has short concise songs that just give you the hook a few times and leave. Opening track Trick The Vicar doesn't even hit the two minute mark and yet gives a great melody and a fantastic hook that a lot of groups don't even have with a track three times that length. In fact, this entire album is just under forty minutes, with eleven tracks on it, none of which are too terribly long.
All of these songs, as stated above, are very melodic and catchy. Riffs are solid and hark back to 70's heavy metal and hark rock groups. You'll find that the solos on here are just as good at rekindling that spark as well, hear the instrumental Materia Prima, which gives plenty of mentions to groups like Iron Maiden and Thin Lizzy within it's three minute cycle. But such is the nature of all that is classic and even good hard rock, not by today's sorry standards, these songs have got the riffs to pull you in and get your head bobbing. The bass is just as good, providing great grooves, hear Lycanthropic Fantasies, that just get you moving.
The vocals, done by Mike Scalzi, probably won't sit well with those that want growling or screaming in their music, as his hard rock croon just soars over the top of these songs. His voice is perfectly suited to the band's style of hard rock/heavy metal without making it sound too overdone or over dramatic. His style is fairly consistent throughout the record as well, he sticks to a fairly typical sound without changing it up too much, which is possibly one of my only complaints about this record.
The production also does good in making the four piece sound like a four piece, giving it a bit of a vintage feel while keeping it sounding modern and clear. Everything is clear on here, with every member coming through. The music also isn't so complex that things get lost in translation, as this is a very riff based album, it's all groove and melody, making it hard not to get into it.
Overall, this is a great record that should please any fan of 70s rock or early metal music. This is a short record that manages to get more done in less than forty minutes what takes most groups over an hour to do. If you like melodic hard rock or heavy metal, this is something that comes highly recommended.
Overall Score: 8.5
Highlights: Materia Prima, Heavyworlder, Kon Tiki
Posted by maskofgojira at 6:09 AM