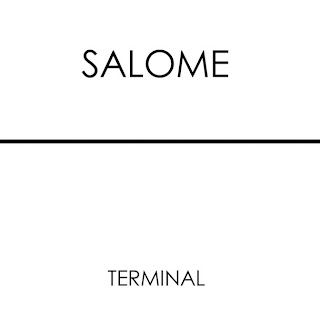 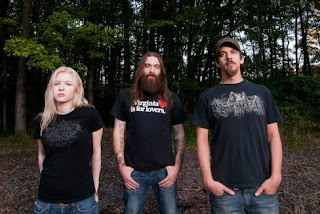 Things Will Only Get Worse.

Salome is a doom metal trio from Virginia. This, the band's second album, was released by Profound Lore Records and keeps up with the label's mighty releases in this year, and previous. Besides that, fans of Agoraphobic Nosebleed will recognize vocalist Katherine Katz as being the most recent addition to that band.
For someone coming into this with maybe only a vague idea of what this actually is, depending on what you think it is anyway, you will either be extremely overjoyed or extremely disappointed by what you find. This is doom metal, it's slow, it's songs are long, it can be a bit of a pain to listen to, and it's not really all that friendly a listen compared to even other extreme metal genres. But if you're into doom you probably already know all of that and more, but this is just a short introduction for anyone that might think this has something to do with grindcore.
But onto the record itself, it's all the above as well as being very desolate, barren, and a bit abrasive while being very engaging. Make no mistake about it, this is a doom record, it's not going to suddenly burst out into a death or black metal riff at any point, though at times there are some hints are elements of grind and noise in here, opener The Message. Rob Moore's riffs have a tendency to come at varying speeds but retain that doom feel to them, think how Toni Iommi managed to write riffs that hinted at various styles while all of them only sounded like him playing them. This is certainly one of the band's strengths, proving to be able to utilize several, let's call them non-conventional, riffing styles while still very much having the same heaviness and crushing nature to each of them. It takes a real ignorant person to say that the opening riff on the epic Epidemic isn't both catchy and heavy.
As for Katz's vocals on the album, let's just say that she's no Angela Gossow (Arch Enemy), she definitely has a unique style, and to her benefit, it works rather well. She doesn't quite have the best or most original range out there, but she pulls off brutally low growls as well as throat shredding screams masterfully. Drummer Aaron Deal is also a master of his craft as well, pulling off excellent fills as well as switching up more simplistic, but fitting, slower parts with some almost punk-infused energy.
However, I can't honestly say that this is the best record it could have been, the longest track, the seventeen minute An Accident of History, proves to stand out like a sore thumb on this album. Unlike the rest of the songs on here, this track proves to move on at a droning pace, which by itself would have been fine, but the fact that this song is filled with samples of people talking about things that never really pop out as being interesting or intriguing. The fact that this is an instrumental doesn't really help the track either. With all that being said, this track isn't the worst song to come out this year, but it the song that stands out to be lacking the most on an album that is filled with songs that just pummel you.
With all the above being said, I can safely say that this album has turned me into a fan. Once again, Profound Lore has released only the best, releasing a band that takes doom and just turns it on it's head. If you like slow, heavy, groovy, brutal music, definitely give this a whirl.
Overall Score: 8
Highlights: Terminal, Epidemic, The Witness
Posted by maskofgojira at 10:53 AM