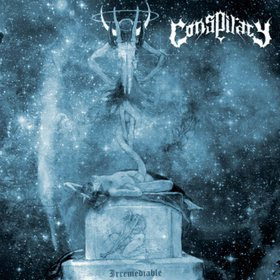 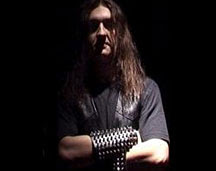 Conspiracy is a symphonic/extreme metal project from the Netherlands. The project was given birth out of former Melechesh bassist Alex "Carpathian Wolf"who had been writing material since the early 90s while living in Israel. This is his third album under this name, following his sophomore release that was released last year.
I can't speak for the previous two releases that were released under this project but this record certainly does take very symphonic route with it's sound. With what little I've heard of the previous album, 2009's "Concordat," this album is decidedly more symphonic and black metal than the last albums almost blackened death metal approach. The thing that comes to my mind with this release is Mirrorthrone, due to it's core being black metal but having more traditional classical music influences as well as a strong sense of neo-classical guitar shredding in here as well. Obviously, this project is much less progressive than Mirrorthrone, but a similar approach can be found within this album to the other project's work.
There is a certainly no lack of great shredding on here, as the solos reminisce of the 80's style of playing with tons of guitar harmonies and neo-classical arpeggios. Tracks like End of Religion and the title-track, Irremediable, have some fantastic old-school playing in them that just make the tracks, in my opinion, so good. But, in my opinion at least, to justify the shredding, you have to have some good riffs, whether or not they are complex or technical doesn't matter, but if they're catchy, and a track like The Pentagram demonstrates that. Unfortunately, I found the first half of the album to be what held and took hold of my attention, the second half just didn't have that special thing that made earlier tracks sound so epic and unique, besides the last track, Bukovina, which was just as good as the earlier tracks.
The vocals on here also have a bit of diversity, not all of it works as well as the musical diversity does however. Previous albums have made use of a more death metal growling and grunting style, this album's main style is a typical black metal rasp. There are a few moments on here where these is a bit of singing, which is done decently enough to be passage and not become annoying or cliche. The title-track is probably the track that, while it has some great musical passages, is totally out of character vocally, where Alex does a King Diamond styled impression, doing odd falsettos and operatic jumps which just don't sit right to me.
Overall, this is an album that certainly makes me want to hear more from this project. Once again the only real complaint I really have with it is the lack of interesting material near the end of the record, but besides that I found this to be extremely solid. If you like black metal with a bit of an 80's shred factor and some major keyboards, not Dimmu Borgir-esque like by the way, check this out.
Overall Score: 8
Highlights: Nocturnal Hunters, Irremediable, Bukovina
Posted by maskofgojira at 9:19 AM