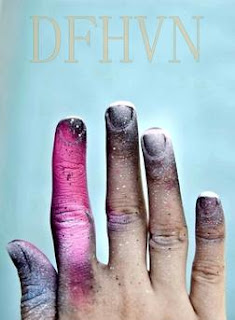 Deafheaven is a post-black metal band from California. This is the groups first demo and has made some waves in the underground with it's take on the post-black/blackgaze genre. In a genre that is filled with many imitators and copycats, this demo is supposed to even rival Neige, one of the genre's creators and proprietors.
The four tracks on this rather short demo proves to combine elements of black metal, shoegaze, post-punk, and dream pop, with the occasional bit of doom as well, with a sound that is uniquely it's own. What makes this band pop out within a scene that has proved to be fairly redundant in it's sound and where, really the only ones able to pull of the sound authentically would be the genre's founders, this band manage to use full-throttle black metal tremolo picking, post-rock build-ups, and short dreamy melodies in conjunction with each other successfully. Their unique blend can be seen within the third track, Daedalus, which opens with an almost happy sounding melody and then shifts into black metal throughout it's length.
It becomes easily apparent that this band is sure to become one of American black metal's shining stars when they can create something this unique on a demo, a full-length or EP should be mind-blowing. While there are some moments on here that are a bit average at best, Libertine Dissolves isn't exactly anything to write home about, but still manages to be heads and shoulders above what other bands in the scene, and even in America are doing right now. The final track, Exit:Denied also manages to throw the doom element in there with some more epic moments.
Overall, like everything else that's been written about this band, and demo, I too am rooting for these guys. This demo is simply spectacular in it's boundary breaking and shows no sign as to conform to standards. If you like any of the above genres, I suggest you check this out immediately.
Overall Score: 8
Highlights: Daedalus, Exit:Denied

http://deafheavens.bandcamp.com/album/demo
Posted by maskofgojira at 12:53 PM