Sargeist - Let The Devil In 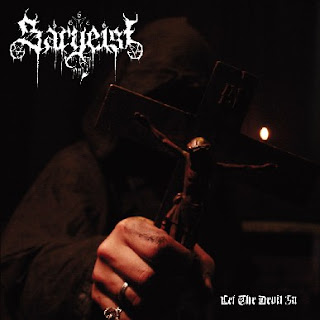 In The Old School, Playing It Right Is All That Matters.

Sargeist is a black metal band from Finland. Throughout their decade, just over now, of existence the band has released three of the most traditionally blasphemic records within black metal to recent memory. Formed as one of the many bands and projects of guitarist Shatraug, this is easily one of the biggest groups he's attached to.
A ten track affair, this is easily one of the most traditionally defiant black metal bands out there today. This band has always stood in defiance of all that is modern and progressive, choosing to instead focus on aggression of violence, as older recordings will no doubt showcase. However this new record begins to include a higher prominence of melody into songs, with noticeable riffs returning that are actually quite catchy and memorable, hear tracks like Empire of Suffering or Burning Voice of Adoration.
But don't let that fool you into thinking that this isn't still a hateful and spiteful recording, as the title says, it's still blasphemic as all hell. I can't say that I'm too much of a lyrics kind of guy, but having read them while listening to this still shows just as much anti-Christian, anti-human, anti-life propaganda as always. Hoath Torog's vocals are also filled with venom as he spits forth these words, cliche as it may be to say that, I found his performance to match what the lyrical subjects are without trying to do vocal acrobatics.
As stated above, this album is blatantly more melodic and straightforward than some of Sargeist's past work, but is also holds a similar amount of variation. There are plenty of full-throttle blast-beating songs on here, but also some more mid-paced pieces that contain perhaps some of the best vocals on the album, hear Nocturnal Revelation. I also have to mention how the production makes this album sound great, it's clean and clear, but it doesn't sound like it was performed by a machine. I know Sargeist albums in the past haven't exactly been the best sounding, but this album totally takes them to the next level.
Overall, I have to say that this is one of the best traditional sounding album, from any genre, that I've heard all year. Most records don't have this sort of intensity and songwriting if they stick to an original sound from yesteryears. If you like old-school sounding black metal, definitely give this a whirl, it's one of the best albums you'll hear from that genre.
Overall Score: 8
Highlights: From The Black Coffin Lair, Discovering The Enshrouded Eye, Let The Devil In
Posted by maskofgojira at 10:36 AM