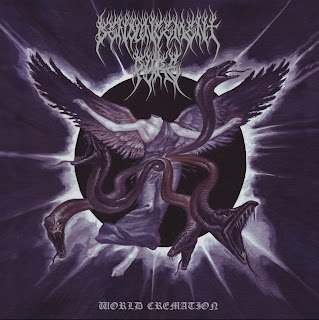 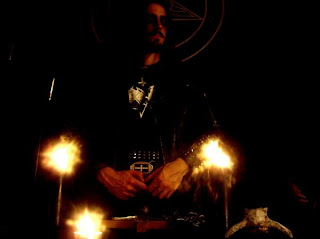 In Opposition To All That Is Modern.

Denouncement Pyre is a black/death metal project from Australia. After releasing several demos and EPs since it's inception in 2002, this is the project's debut full-length. Though this is a project, this is a duo, being members of Nocturnal Grave and Portal.
After a very short introduction chant, this album just bursts open with aggressive black metal riffing and growling vocals. This sort of vibe continues throughout the entire disc, being a black/death metal record it's not like it's ever going to mellow out at any point, but it just feels like a a vicious animal attacking you for no reason. I'd have to say that this record does lean a bit more towards black metal than death metal, but both parts play on each other throughout. It proves to be that the black metal tracks are a bit more straightforward, while the death metal tracks have a bit of a blending between the two genres and favor a more balanced sound.
Most songs are performed in a rapid, straight-ahead black metal fashion, no detours or progressive interludes, these songs blast you, punch you in the face and leave. There isn't a lot on this album that really makes it stand out from a lot of other groups doing this sort of thing, but it does what it does well enough to make it at least entertaining. There are several tracks that do manage to do things differently, Salvation, The Fading Light is one of the slowest tracks on the entire album and Invination of Poison, the longest track on the album, features the most groove and headbagable riffs on the entire disc thanks to more mid-paced riffing.
Honestly, and this isn't a bad thing at all, I found the vocals to sound kind of like what I'd imagine a rabid dogs sounding like, they're rough and sort of manic sounding, but fit the music very well. Many times the vocals will have a more black metal vibe to them, retaining a more raspy tone and growling only occasionally, but ultimately it works to their benefit at maintaining a sound that sounds animistic. However the growls do come up, hear Engulfed Temples, and they are able to retain that same sort of primal sound that the screams do.
Overall, this is a decent release, it's not great, but it's worth hearing. Some tracks were really good and blasted me in the face, but some were a bit too monotonous. If you like aggressive black/death metal then definitely check this out.
Overall Score: 6
Highlights: Black Womb of Magdalene, Purification, Salvation, The Fading Light
Posted by maskofgojira at 10:53 AM