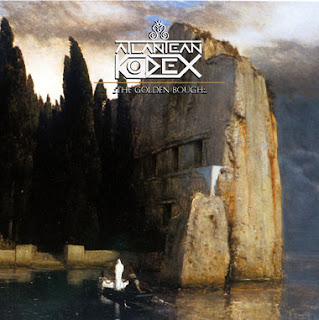 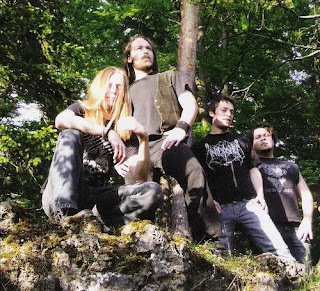 Atlantean Kodex is a heavy/doom metal band from Germany. This is the band's debut full-length release, following several EPs and a live record. For the record, if you want something that sounds modern, you better look elsewhere.
If you have no patience for your music, you'll most likely hate this record. The two opening tracks of this record, Fountain of Nepenthe and Pilgrim, both surpass ten minutes. Fortunately the band's sound is not so rooted in doom to make it feel like you're crawling at the slowest pace possible to get through those epics. The production on here is a bit hazy however, giving it a bit of a nostalgic feeling, which is something that affects each listener differently. In fact, the band state that this haziness is due to the fact that the album was recorded using no Dolby in the mix and no quantization or triggers were used on the drums, so this was recorded old-school and it sounds like it.
Sonically, the band have sited groups like Bathory, early Manowar, Manilla Road, and Solstice as their main influences, and it comes out in a similar fashion to what those groups mixed together would probably sound like. You get a lot of twin-guitar harmonies, a slower playing style that harks back to Black Sabbath style doom, and very epic sounding lyrical content. I'm not sure if you can mark them off for this but, in my opinion, it really sounds like the band is trying too hard to get their songs sounding as epic as possible; which is really the nature of all bands playing doom in this style, hence the questionable mark. Since a lot of doom bands go for the epic style, I don't think you can discharge this guys for doing the same with their songs as well, but sometimes it just gets to be a bit much, A Prophet In The Forest is just too long and monotonous, to me anyway.
I found that while most of this record was centered within the older and classic heavy metal and doom styles, a few broke from the pact and lept out. The shortest, actual song, on here, Disciples of The Iron Crown definitely pops out, sounding more like "Painkiller"-era Judas Priest, complete with pounding double-bass drums and ripping solos. Vesper All Hymn shows the band using more Bathory-esque acoustic passages as the ballad of the album, if you would choose to see it that way.
Overall, this is a decent record, but not one of my personal favorites. This should most definitely get any doom metal fan interested because it is a bit different to a lot of other doom metal groups out right now. If you like doom or classic heavy metal, definitely check this out.
Overall Score: 6
Highlights: Pilgrim, Temple of Katholic Magick, Disciples of The Iron Cross
Posted by maskofgojira at 11:53 AM