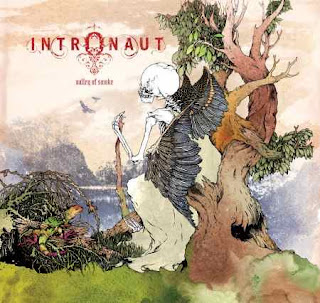 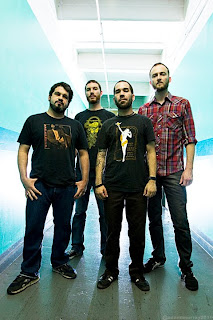 The Smoke Is Actually Clearing.

Intronaut is a progressive/post-metal group from California. Since the group's inception back in 2004, the band have steadily been growing both in terms of their fan base and their style. This album has been praised by critics, saying that this is where Intronaut enter the A-list of prog metal bands.
Anyone familiar with Intronaut will know that they came from the same starting grounds, stylistically, as groups like Mastodon and Baroness, sludge metal, and like those bands, they've grown up into their own sound. This sound carries with it the heaviness and slow moving tendencies of their sludge metal background while taking the more introspective passages of post-metal, the adventurous spirit of progressive rock, and even a touch of the fusion leanings of touring partners Cynic during a few occasions. Most of these influences are blended and mashed together into newer shapes where one never completely dominates another, often shifting from one style to the next without going Mr. Bungle on us.
With stylistic variation also comes a much more fluid sounding band, in this case anyway, where every member seems to have only gotten better at their respective instruments. The heaviness that made up their past releases is not so much forgotten on here as much as it's been put into less of the foreground, allowing the progressive tendencies to move farther up the latter with this album. The band have also pulled a Mastodon by putting clean vocals into their sound as well, which appear on Elegy and only become more prominent throughout the rest of the album. There's still plenty of heavy and groove on here however, Sunderance, it's just interspersed with a lot more prog and experimental tendencies. Having Tool bassist Justin Chancellor guest on the title-track, Valley of Smoke, also doesn't hurt either.
Like mentioned above, the band members have no doubt grown better at their instruments, but the production on here has also brought out every one of their playing styles into the open. Guitarists Sacha Dunable and Dave Timnick switch between crushingly heavy riffs to clean and melodic interludes like it's going out of style, but it works. Bassists are often overlooked in metal, and this year has no doubt seen some great fluid playing on records, but Joe Lester definitely takes the cake for his playing, which is not only clearly heard on these songs, but also quite fluid and jazzy, playing a very integral part in the band's sound, listen to Below. Drummer Danny Walker is a beast on the kit, shifting tempos at a constant pace while maintaining an almost 4/4 style of fluidness as well as playing some great fills.
Overall, being relatively new to this band, and being exposed to it from my dad no less, I was blown away. All the good things I had read and heard about this record was true, and I'm glad they were. If you like progressive music, give this album a whirl for sure.
Overall Score: 9
Highlights: Above, Core Relations, Valley of Smoke
Posted by maskofgojira at 8:13 AM