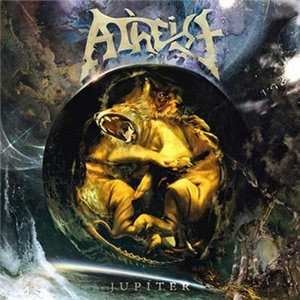 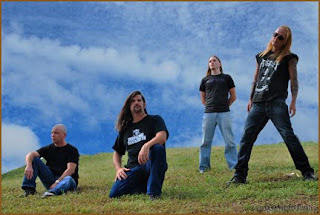 Atheist are a technical/progressive death metal outfit from Florida. This is the band's first full-length since their reunion back in 2006. They are known for releasing two albums that pushed the genre of death metal into the unknown realms of jazz and fusion along with Cynic.
Anyone that expects this to come down as smooth as 1993's "Elements" might want to hold their breath, this thing is frenetic and technical as ever. Atheist move about on opener Second to Sun like a absurd mixture between the Dillinger Escape Plan and "Individual Thought Patterns"-era Death, it's technical, fast, a bit quirky, and brutally intense. Luckily for both the band and listeners, this is quite catchy despite being so off-kilter.
I've been reading how people are calling this album boring simply due to the fact that bassist Tony Choy left the band just before the recording of the record, and my response to that is, you read that he left before the record was released, I'm assuming, so why would you think that the basslines be there since he isn't. Due to Choy not being a part of the album, and band anymore, doesn't mean that the basslines that guitarist Jonathan Thompson are terrible and ruin the album, they're just not done in the same way that Choy would have done it. In addition to that, the bass is still very much audible while not dominating the sound.
But the rest of the band still kick as much ass as ever, no more talk of Choy he's gone, get over it. Thompson, Chris Baker, and even vocalist Kelly Shaefer simply tear apart any ideas of simplicity on this release. While the music is certainly a far cry from traditional, or brutal for the matter, death metal genres. This album genre hops without making it obvious or even noticeable for the most part, hopping from mind-blowing technical mathcore to black metal tremolo picking then jumping into a more blue oriented solo, hear Live and Live Again. Having said all that, drummer Steve Flynn is simply jaw-dropping at his worst, throwing fill after fill and tempo shifting like a mad man throughout every track. There are also more then a few parts on this album that feature drums only, or drum and vocal only, sections that really give him the opportunity to show off.
Very few albums have reached this level of intensity and technicality this year while still making them accessible to the common ear. I can understand that some people want the fusion excursions of "Elements," the trash oriented sound of "Piece of Time," or the blinding originality of "Unquestionable Presence" but that's been done by the band before, get over it. If you like extreme music, check this out.
Overall Score: 9
Highlights: Fraudulent Cloth, Faux King Christ, Third Person
Posted by maskofgojira at 9:21 AM