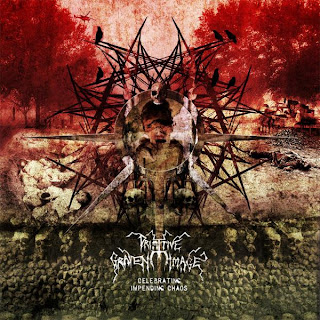 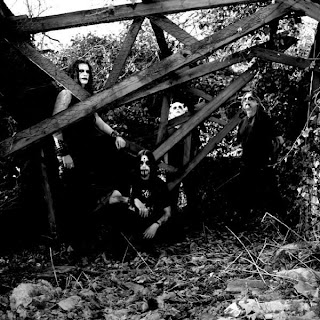 Primitive Graven Image is a progressive black metal from the UK. This is the band's second album and includes an even more diverse range of influences coming into the melting pot. The band have become more well known after an appearance at 2009's Bloodstock Open Air Festival.
This album jumps away from the more traditionalist view of black metal that the group's 2007 debut album did, mixing in several other styles of music. Influences from death metal, industrial noise, progressive rock, and even atmospheric black metal have seeped into the sound of this album, while not completely dominating the band's already aggressive sound. Most of these influences aren't even so apparent that fans will notice them being there immediately, but are lurking beneath the surface. The track Kings of Infinite Space showcases some of the many influences from some of the more death metal riffs to the almost Pink Floyd like section when the guitar solo comes in.
I would say that the most notable chance on this album from their debut would have to be the use of melodies on here, they are so much more prominent as well as catchy. I found tracks like The March of The Cattle and War 'Til Death to be extremely catchy while being intense and aggressive at the same time. The fact that these tracks never slowed down in order to use a melody only shows the enhanced songwriting abilities demonstrated on this album and by this band.
But to reiterate, this is still a black metal album at it's core. There is still plenty of tremolo picking, blasting drums, and screaming vocals on here to appease even the most kvlt person, so you don't have to worry about too many ingredients spoiling the soup. A track like Wandering Through The Wood really have a more traditional sort of vibe to them, while still having some death metal as well, but should be enough for people from the more traditional side of the genre to latch onto this.
Overall, this proved to be a very good sophomore release that shows a great amount of potential. I was pleasantly surprised by how much I enjoyed this release, having heard very little of the group beforehand, this had enough diversity within it's sound to not only keep me listening, but engaged. This is certainly a black metal album you'll want to hear this year.
Overall Score: 8.5
Highlights: The March of The Cattle, March Onward/Celebrating Impending Chaos, A Gruesome Relic of Death and Decay
Posted by maskofgojira at 5:07 AM