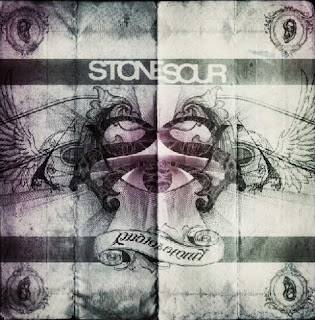 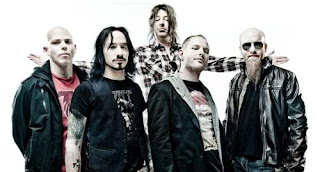 Stone Sour is a alternative rock/metal group from Iowa. Having come to fame in recent years thanks Slipknot's own Corey Taylor and Jim Root restarting this band after giving their metal project a rest. This is the third full-length release from Stone Sour and shows an even more eclectic mix of styles than their past albums.
After the short introductory title-track, Audio Secrecy, the album really opens up with one of the heaviest tracks on here, Mission Statement. While hard rock/metal fans may be able to get into this track, it is certainly not an indicator of what this album contains for it's remaining twelve following songs. This album doesn't have a central style that conforms each song to a similar sound, this album runs the gambit, going from alternative influenced hard rock/metal songs to very pop rock stuff. While fans of the band's last two releases will recall that a diverse amount of material was present on those records as well, it's never been such a wide amount of styles present, as most tracks usually had a more rock or metal backbone to them.
That's not to say that these songs don't have their metal/rock moments, you won't hear any dance-pop elements on here, but lead single Say You'll Haunt Me has much more in common with Bon Jovi than even Disturbed. This is a trait that carries through quite a few songs on the album, where a more poppy direction is clearly present in the sound, less heavy riffs, they're still there mind you, but the songs are obviously much more melodic. The songs on here don't have the same sort of aggression that was present on the debut or the darkness on the sophomore release, but are replaced with a very poppy, almost upbeat in some senses, style of songwriting that is quite memorable.
But probably the thing that makes this album a hard listen, for me anyway, was the production, this is just way too clean sounding. The two previous albums were never as clean as this, the debut was actually quite hazy and raw sounding, which complimented the music, especially in comparison. Some of the heavier and rock based tracks are too mechanical sounding, it's only on the more stripped-down tracks, Hesitate or Miracles, that it feels more like a band, albeit, a power-ballad vibe in both tracks, but still a band.
Overall, this is an album that probably won't appeal to metalheads that don't listen to more mainstream rock music, but it's still a pretty solid record. This is definitely one of the most melodic albums I've heard all year, which might appeal to some more than others. If you like very poppy, clean sounding, radio rock/metal, check this out.
Overall Score: 7
Highlights: Digital (Did You Tell), Let's Be Honest, Miracles
Posted by maskofgojira at 7:03 AM