Juliettee - Fragile Like A Bird... Immense As The Universe 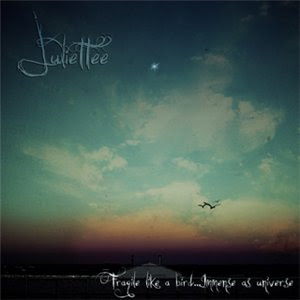 Pulled Into The Atmosphere.

Juliettee is a post/progressive metal project from Mexico. This is his debut album and features pretty much what one might expect from hearing anything that the last sentence just said. I found the band scoring the web and thought it looked intriguing.
This album contains that post-metal sound more than the prog, which I think benefits the band. The accumulation of different atmospheres and textures on this album are just pristine which make the builds and falls so much more palpable. The opening track, Life Becomes Stardust, Under The Lights of A City, is just breathtaking, to me, due to the builds that include very simple guitar lines but with so many textures. In that sense, one could draw a comparison to artists like Alcest or Amesoeurs, projects of Neige, in that the beauty that this album holds is just otherworldly.
However, I found the heavy, more metallic side of this band often conflicting with the ambient soundscapes that were created. When the metal side of the band come in, it has more of a tech metal/djent type of vibe going on, there guitars are pretty much doing a Meshuggah ripp-off, which would be fine if the atmosphere behind them wasn't so interesting that it often drew my attention away from the metal and towards the ambient. But while I didn't find the metal side of the band that interesting, it was certainly a lot better than the vocals.
The vocals don't become a problem until the fourth track, Blue Sky - So Pure - So Impossible, because they're either too low in the mix to either really matter or they're just not even there. It's on the fourth track where they actually come in and manage to almost ruin a great track, as they sound like really bad deathcore growling, which totally takes away from the atmosphere that was on this track. But the clean vocals, when they're used, don't sound nearly as bad, mainly cause they're pretty low in the mix anyway, but they sound a lot more fitting for the music.
Overall, this is a pretty decent album, I wouldn't call it bad, but it definitely needs improvement. This is actually a decent debut recording, some great atmospheres and some tracks are really quite good. If you like tech metal/djent or post-metal, check this band out.
Overall Score: 6.5
Highlights: They Escaped From Hell to Be Free, Saturday Nights - The Long and Cold Road of The Moon, Always Exists The Same Yesterdays On The Train of Autumn
Posted by maskofgojira at 12:23 PM