Nocturnal Depression - The Cult of Negation 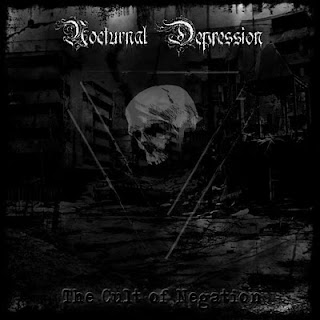 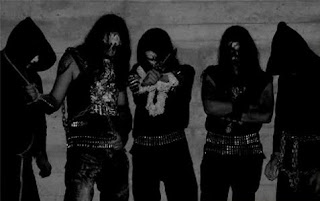 I Think Their Name Says It All.

Nocturnal Depression are a depressive/atmospheric black metal group from France. The group is one of the longest running groups to come from that scene and yet has yielded a surprisingly small output compared to their contemporaries. This is their fourth overall full-length record and their first in two years, it doesn't seem that long, but their first three albums were released within a year of each other.
Those that know about the suicidal/depressive black metal scene will no doubt have heard and formed opinions about this band, as they are one of the more well known groups from that scene. Personally, I always found this band to stick out mainly due to their actually being a band, to play live, most being just projects, even though the main composed, Herr Suizid, does not play with the band live. Aside from that simple fact, it was also the band's willingness to create epic, atmospheric pieces that managed to capture depression in a way that didn't have me feeling like I was listening to a kid in his basement screaming for no reason but for those to pity him, hopefully that statement gets the message across that I do enjoy vocalist Lord Lokhraed's performances.
This record follows a similar style to what the band has done in their previous albums, but with a bit clearer production, not that that's saying much. This record is still pretty raw sounding compared to many other records to come out in black metal, but compared to other groups from this scene and even the band's older material, this is an improvement. Having said that, like their previous recordings, this lower production adds a sense of darkness and ambiance to the record that isn't attained through pristine production. The guitars maintain a real primal sound that's distorted but melodic, through clean production, the band would not be able to achieve this sound.
But musically, this album sees the band including some more traditional black metal sounds as well as a bit of punk, maybe, than usual. Tracks on this record are much shorter than on any other record from the band, as well the entire record proves to be under an hour in total, as well as including some faster playing. The song We're All Better Off Dead is not only quite a short song for the band, but it is also one of the most melodic songs the band has ever written as well. Home Asylum on the other hand is much faster around it's end, recalling a lot more traditional black metal tremolo picking and more aggressive playing.
Overall, I can't say that I enjoyed this record as much as some of their older material, but it's still quite good for what the genre has offered. This record should definitely please long time fans as well as get the band a few newer ones as well. If you like depressive black metal that has an original sound, check this out.
Overall Score: 7
Highlights: Dead Children, The Cult of Negation
Posted by maskofgojira at 11:16 AM