Eventide - The Beast and The Machine 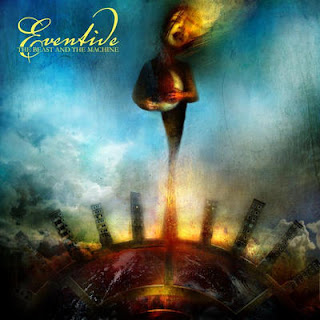 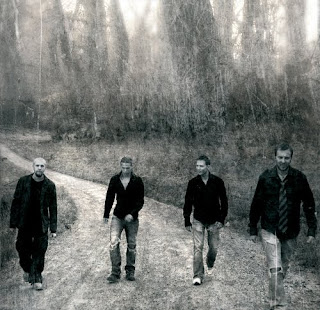 Eventide is a progressive/melodic death metal group from Sweden. This is the band's second full-length record, following up an underground success with their 2006 debut "Diaries From The Gallows." This record sees a change in line-up as well as a new found focus on progressive influences.
I'm just going to say this bluntly, hopefully anyone coming into this doesn't have a problem with early melodic death metal groups like In Flames, At The Gates, Dark Tranquillity, and the like, cause this album seems to draw from a lot of that. It's hard to kind of find a unique sound for this band, it's there, but mixed with parts that sound like the groups above. Just to make another point clear, this is not in any way a metalcore record, the music, while being melodic, has very little -core sound to it, IE. no breakdowns.
The vocals on this album sound a lot like Anders Friden of In Flames, mid-period In Flames anyway. The clean vocals on the other hand don't sound anything like any of the groups above, hinting more at the prog side of the band. Clean vocals are very clear and almost emotional at some points, hear Mr. Death, which at times hint towards a Pain of Salvation influence.
That is probably the biggest similarity within this album, a lot of it sounds like a better version of In Flames, hear tracks like Passenger and The Final Spin. Very melodic while also being heavy and having that death metal element in their sound, which is something In Flames clearly lost along the way, sorry to keep bringing them up for so much of the review. Personally, when the band is able to steer clear of the now generic genre of melodic death metal by putting in a few curve balls throughout the album. Plastic demonstrates a faster and more technical side of the band while Life, The Obstacle is a track that favors to build more so than any other track on the album. Album closer, Through Black Holes, brings the most progressive influences in, including sections during the verses that sound similar to Katatonia.
Overall, this is definitely an above average melo-death record that other bands in the genre should definitely look to for originality's sake. While not everything on here stands as being totally unique and amazing, the latter stages of the album show a band that is definitely experimenting with their sound. If you like melo-death that bridges off into other genres of metal, check this out.
Overall Score: 7.5
Highlights: Mechanical Slaves, Life, The Obstacle, Through Black Holes
Posted by maskofgojira at 11:39 AM