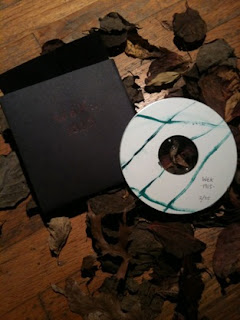 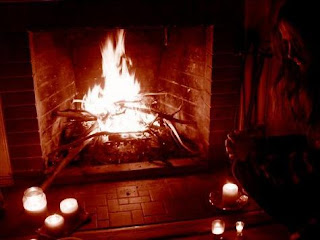 Get Around The Fire And Sing Songs.

Wék is a black metal group from Maryland. This is the first release from the duo and was released on October 31st, Halloween. I first noticed the group on Encyclopaedia Metallum, searching for random new groups, and thought this sounded interesting.
First off, I did not buy this record, I listened to it on their Myspace player, so don't go hunting me down or trolling this review. The sound quality, I know isn't the best on Myspace, but it gets the job done for my purpose of listening to it. The fact that this thing is pretty raw sounding anyway I don't think hinders it from sounding even worse because of the player either.
But onto the sound of this demo, first off two songs, put together as one according to Metallum. The duo, with one member playing drums and the other playing guitar and vocals, it sounds that way, there isn't really a low groove playing underneath the guitars, this sounds like it was done with what they have. The music on the first track, Rain, is pretty mid-tempo with some parts that go into typical black metal but it stays in a pretty monotonous groove for it's duration. Unfortunately, the production makes the drums and vocals louder then the guitars, which might have made this a bit more entertaining.
Lumber, the second song, is much more interesting, featuring a slower build that leans more towards their influences, which are sited as groups like Altar of Plague, Wolves In The Throne Room, and Earth. The build and mono minimalistic playing really creates a much darker atmosphere. I have to say that the build on this track is really good, building feedback before a slamming guitar chord.
Overall, if you decide to check this band out, I'd recommend the second track, but listen to them both if you want. While there isn't a lot that makes this band stick out right now, I thought that the second track hinted at some cool directions, drone and more atmospheric influences to which I'd like to see further developed. If you like raw sounding atmospheric black metal, check these guys out.
Overall Score: 6.5
Highlights: Lumber
Posted by maskofgojira at 8:46 AM