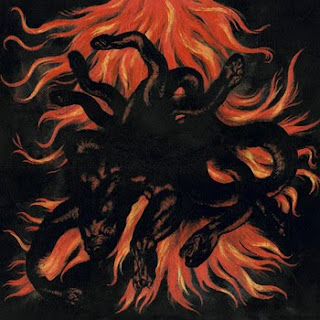 Deathspell Omega is a black metal group from France. Over the last decade the band have risen from the tops of underground obscurity to one of the most original groups within black metal today. Over the course of their last two releases, they've built up a concept and this is the conclusion to that concept.
I'll leave the concept of this album, and it's two predecessors, to those that are much more familiar with it than I am, so I'll focus on the music itself. Dissonant, progressive, technical, avant-garde, and unique are all words that describe not only this album but this band in general. After their early traditional black metal work, the band's more recent material, as stated above, has been put at the forefront of modern black metal. This album will be held in high regards to all those that respect the genre of black, or extreme, metal.
This album, sonically is much less progressive, in one sense, as the songs are much shorter and not as free-flowing as the last two releases have had, but this album is much more complete sounding, being the right way to end any sort of multi-parted album. When songs like Wings of Predation or Phosphene burst forth, they end up sounding like the frayed ends of someones sanity with how confrontational they end up presenting themselves as. Yet there is still enough of a actual sense of songwriting in the band to allow songs like Dearth to emerge from beneath the violent ecstasy that is used within a lot of this album. There are several moments where you're left with no choice but to just follow where the music takes you, as most tracks don't often slow down to give you a chance to kind of comprehend exactly what's going on, and at times it can even feel like the music is just throwing you against a wall, but that might just be me.
With all of the above being said, this album is one of the few this year that I can say with certainty actually manages to sound epic. The playing on these songs just creates an overall atmosphere that isn't found on a lot of records, on in most bands at that, and I don't think anyone can deny the majesty that's found near the end of a track like Epiklesis II, as one example. Even when it sounds like this record is going to drive you insane, there's still something haunting about the atmosphere that it manages to conjure up within all that chaos that manages to pull, at least me, in. Yet, in the final track, Apokatastasis Pantôn, everything comes full circle, closing the disc with possibly the most straightforward and traditional sounding black metal song the band have recorded in years and it still has that same air of unique majesty surrounding it.
Overall, this is certainly one bastard of an album, almost nothing, if even that, comes close to how this band sounds. This isn't the easiest album to get into, a lot of riffs are fast and dissonant sounding so it's not likely you'll end up remembering a melody or a hook. If you like abstract extreme metal, definitely check this one out, you won't regret it.
Overall Score: 9
Highlights: Wings of Predation, Malconfort, Devouring Famine
Posted by maskofgojira at 8:19 AM