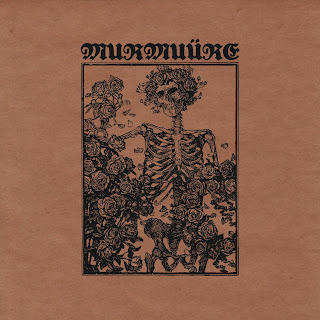 Murmuüre is an ambient black metal project from France. This is the debut recording from the project and came to my attention by another blog that reviewed this album. Catching my eye with it's different cover art and unique sound, I soon found myself more than willing to check this out.
If an album that starts with an almost new age sort of introduction bothers you, feel free to skip the rest of this review in favor of something else. The introductory track Primo Vere moves from new age to country-western movie score to raw black metal within it's fairly average length. But with that comes a take on building atmospheres from one section to the next to allow seamless transitions from one part to the next. However each track features it's own take on building atmospheres that, while it might not be the most conventional in this sub-genre, actually harks to more post-rock similarities.
The production also plays a big part in this album, it's very raw, while not being entirely undecipherable. There's enough of a noisy sound to give it an almost vintage feel while still being quite clear as atmospheres and different textures manage to shine through, hear Amethyst. I don't know whether this next part was intentional or not, but the drumming on here lends itself to an almost industrial sort of sound, as it's very mechanical and precise sounding on most tracks.
Overall, this is actually quite a well conceived debut with a lot of really unique sonic experimentation. There's definitely a lot of potential in here and a future release hopefully manages to only expand upon these ideas. If you like experimental, more ambient based, music than you should definitely give this a spin.
Overall Score: 7.5
Highlights: Reincarnate, L'Adieu Au Soleil
Posted by maskofgojira at 6:03 AM