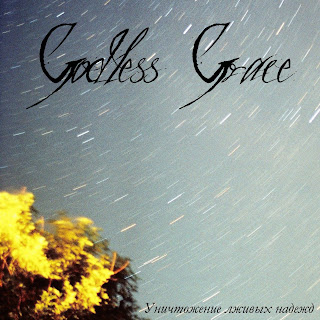 Godless Grace is a depressive black metal/blackgaze project from Russia. This, as far as I know, is the project's debut recording. I'm reviewing this simply based on the cover alone, I have little to no knowledge of the band itself, feel free to inform me if you know anything.
Let's just start off by saying that this thing is best used as atmosphere or ambient music, but that's just me. I found that this album is very repetitive and dreamy when it's using clean guitars and minimalistic drumming, but can prove to be just a bit more annoying when the vocals and distorted guitars enter. When those two factors enter into a track, it becomes little more than a pale imitation of what genre founders, of depressive black metal, have done. Opener Несуществование starts off well enough with some decent cleans and soft drumming, but soon becomes much more dull when the vocal shrieks appear.
The production, being from Russia, I never expect the absolute best, but for the style that this is, it actually isn't all that bad. The guitars are very atmospheric, with a lot of delay and reverb, and the distorted ones are pretty crisp sounding in comparison, but unfortunately the drums are pretty far back in the mix, which, based on what you think of this, can either be a good thing or a bad thing. The vocals are also quite far back when compared to the guitars, but this proves to be a good thing, as they don't tend to ruin the background ambiance, hear Освободи!.
To put it bluntly, when this album gets ambient, it gets good, when it gets metal, it tends to fade into the grey, as happens with many other artists in this sub-genre. I can't say that this album really ever impressed me with how different it is compared to other records, though it did have some decent moments, none of them that impressed me were ever distorted. Even when comparing this to other records of it's genre, this one is a bit different, as only about half of this record actually contains what could be seen as songs, the other half is just ambient music, which is what hit home with me.
Overall, this album has some really great ambient and atmospheric moments, but the metal moments are far from great. While I can't say this is a record that will please everyone, fans of the more ambient and atmospheric oriented sides of music will definitely find some of these tracks at least decent. If you like the above statements, chances are this album might appeal to you.
Overall Score: 5.5
Highlights: Белые крылья, M., Уничтожение лживых надежд
Posted by maskofgojira at 12:11 AM