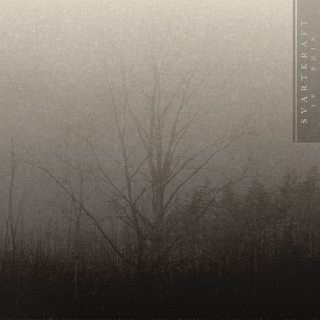 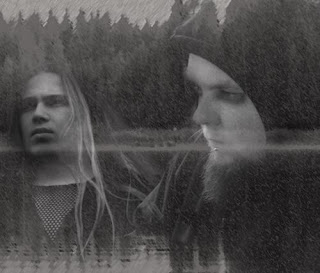 Ruins Of The Old, A Sign Of What's To Come.

Svartkraft is a black metal duo from Finland. This duo only recently caught my attention with the cover of this album catching my eye. From what little I know about the group thus far is that they started off as a black metal band and have gradually been expanding their sound to include some more elements outside of the genre within it.
From the beginning, when this thing does not start blasting you in the face, you know something weird, or different, is coming your way. The Plague Ship opens with a very fluid bassline with slow building clean guitars coming, kind of adding a psychedelic vibe to the track. Not only is that it, but clean vocals are also brought into the fold, much to my amazement, anyway. This is just the opening track by the way, and it has more in common with post-rock/metal and progressive music, as it just keeps on building, adding more and more instrumentation on top of everything, until an eventual heavy section comes in, while retaining the psychedelic vibe no less, using a wah-effect on the guitar.
After hearing the opening track, seeing as I'd never listened to this band before checking out this album, I had no idea what to expect. Lets just say that the band certainly has it's moments of pure, old-school black metal, but a lot of this album has more of a progressive, and at times industrial, edge to it. Let's just say that this album is different as well as entertaining, seeing as I, personally, expected it to be a fairly straightforward black metal record.
There are moments of clean, both acoustic and just clean electric, guitars that bring both a folk or psychedelic feel to whatever song they're used in, hear The Serpent Sun for an example, which is a welcome from a more melodic, if symphonic at times, black metal riffing. The clean vocals are also used quite skillfully, used during the quieter tracks on the album and they are different from your pagan chanting, operatic cleans, or raspy talking, the singing on here sounds like an industrialized baritone chant, low, sort of mechanical, but very cool. The drumming on here also impressed me quite a bit, as it's never straight-out blasting, a lot of this album is actually pretty mid-paced, keeping very good rhythms that, in a song like the title-track, Ruin, are actually almost danceable. However, that's not to say there aren't a fare-share of double-bass pounding moments on here, hear My Darkness.
Giving all the above credit for being much different than what I thought it would be, there is still some tracks that don't quite gel with the rest of the album. Probably the track that stood out to me as being the problem child is track six, Death's Release, which, in my opinion could have been the best song on the album, if it had about a minute, even half a minute, of time taken off of it. That track in particular has a great violin melody being played through the song, but there's a section of straightforward black metal in the middle of it that just felt out of place, to me at least.
But overall, this is a really good album, that once again, surprised me. There's a lot of really cool ideas on here that transcend simplistic black metal and should be able to appeal to those outside of that genre. If you like progressive, experimental black metal, that still has some of those moments, definitely check this out.
Overall Score: 8.5
Highlights: The Plague Ship, Song For The Damned, Pale Procession
Posted by maskofgojira at 12:37 PM