Woods of Desolation - Torn Beyond Reason (2011) 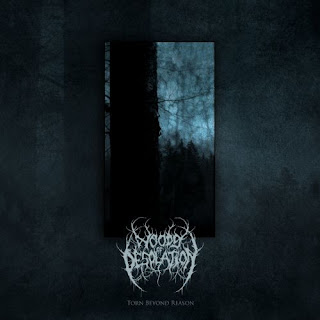 When Austere split early last year, many people were left wondering what it's members would end up doing. While most of the melodic and dreamy elements of that band went into the Grey Waters EP, the band's heavier and more aggressive side went into Woods of Desolation. Last years "Sorh" EP from this project didn't fair so well, with several people questioning why Austere broke up for this band.
Within the opening seconds of the title-track, Torn Beyond Reason, it becomes obvious that the band have evolved within the year or so since "Sorh." First off the production sounds better, it's not as lo-fi, now it's more hazy and dreamy, with blazing guitar lines and blasting drums definitely bringing the intensity, but it isn't as brutal and repetitive as before, I'd go so far as to say this album is actually quite melodic most of the time. The vocals are still very pained and wretched, despite vocalist Desolate leaving the band before recording this album.
While all the sounds that were present on the band's full-length and EP are on here, the aforementioned dreamy atmosphere that has invaded this album's sound definitely calls back to the work these guys were doing in Austere. The addition of clean vocals also calls back to that as well, hear Darker Days. However, I'd say that the atmosphere that Woods of Desolation creates is different to that of Austere, a track like An Unbroken Moment definitely has that dreamy vibe to it, but it's a lot darker and melancholic than what I've heard from Austere. But the short interlude, November, is easily the brightest and most upbeat song I've heard from this band.
Overall, I'd say that this is a really solid album, it definitely returns to places fans might have thought had been lost after Austere broke up. I can't say that this is all that original sounding, but it's well performed and structured, it's not too long or monotonous at all. If you like post-black metal or more atmospheric bands, definitely look into this album.
Overall Score: 7.5
Highlights: Darker Days, Somehow...
Posted by maskofgojira at 11:46 AM