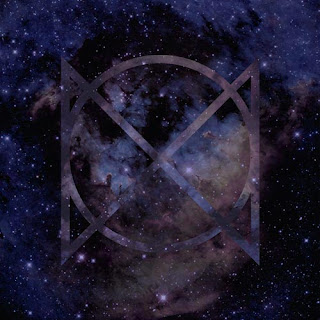 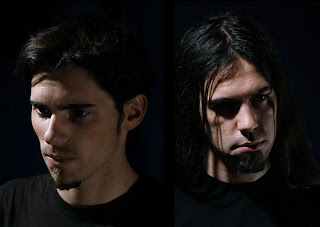 I remember first finding this group through them actually being signed, the announcement anyway, and I heard a sample of this album and it was pretty cool. I'm a fan of death/doom when it's done in a way that brings a unique atmosphere to the music that accompanies it. This duo managed to create that within the sample I heard, so when I found this album, I was more than willing to listen to it.
The atmosphere is what I usually like in doom metal, unless they write some really good riffs, but in most cases, it's the atmosphere. This band has a very gothic, yet astral, sort of vibe going on with the keyboards on here, they use a very majestic sort of style, where it kind of gives the sound an ethereal kind of quality, but it's darker. Like most gothic music, and I use it more in like a Dead Can Dance meets Paradise lost sort of vibe, not Lacuna Coil, the piano an d organs used on here are very effective at how they personify an almost classical sound, yet remain very solemn and mournful, hear a track like Funereal Dance.
Most of the songs on here aren't that long, for a doom metal band anyway, and manage to remain more memorable than a lot of other groups that end up doing songs twice as long. The vocals maintain a very low and guttural growl throughout most of the disc, which is fine, it didn't do much for me, but it fits the genre. While tracks like New Heaven and Rebellion make use of some whispered singing sort of vocals, they feel a bit more "right" to me than the growling, I felt good about the screaming as well.
Overall, this was a pretty cool album, though I'm partial more towards the atmosphere than the actual metal portion on here. It's a beautiful record at times and just sounds so majestic and grandiose. If you like doom metal, or any sort of gothic based music, I'm sure you'll really enjoy this album.
Overall Score: 8
Highlights: Leaving, Fear of The Hidden, Fade to Blue
Posted by maskofgojira at 7:26 AM