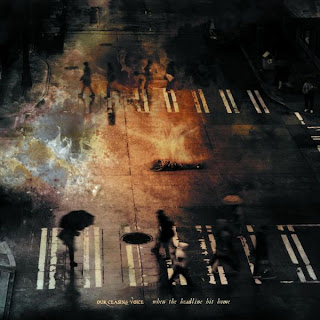 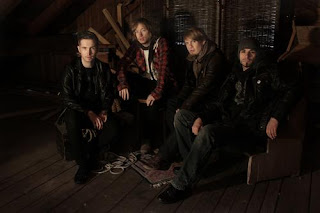 Our Ceasing Voice is a band that I'm only now becoming acquainted with from hearing a sample video of theirs. Hearing that this album was some sort of elaborate concept, and along with the great looking artwork, I just had to check it out. This is also apparently the band's debut full-length record as well.
Starting out as a soft post-rock song and growing into epic sounding shoegaze influenced finales is something I've always admired some groups doing. Having something grow from the most minimal idea at it's beginning and just grow into something so wide in scope is something I really respect. While some songs on here don't build into the wall of sound that is most associated, by me at least, with the genre, there's still more than enough going on to keep the listener entertained. Songs on here do take their time building up, but I actually enjoyed the journey to the conclusion of each track more than I thought I would simply due to how much sound was being used on here, there's always something going on.
There's quite a bit of variation on here as well, as despite guitar being a common instrument on here, it's not always the main focus in a song, hear Without Even Breathing, where a piano is utilized for most of the song. There's also an overarching sense of atmosphere on here that really drew me into it for some reason, sometimes even that takes the lead role in a song.Vocals don't even come into play until the third track, Highway Lights. But what really made this album for me was the different emotions that I felt each track was able to capture, from more up-beat to melancholy, compare a track like Passenger Killed In A Hit and Run to Summer's Orange Haze for example.
Overall, I actually really enjoyed this album and it surprised me as to how much I got into it. There's so much sound on here, constantly changing and moving, it almost feels alive at times, it just drew me in and didn't let go. If you're into post-rock, shoegaze, ambient, or more atmospheric types of music, definitely check this album out.
Overall Score: 8.5
Highlights: Highway Lights, The Only Ones Dead (Are Those Who Are Forgotten), Polaroids and Chinese Whispers
Posted by maskofgojira at 6:52 AM