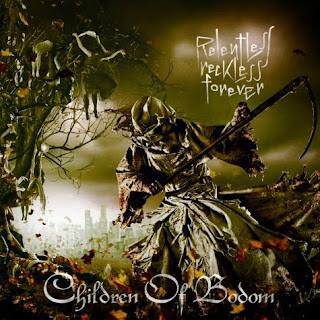 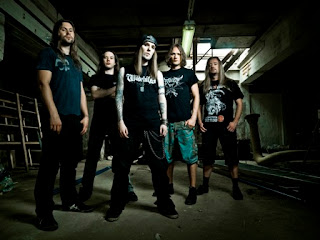 There was a point in my musical evolution where I first started getting into bands with screaming vocals, band like Bodom were my gateway drug. Being a person who grew up on power metal and had begun to explore metalcore, these guys really were the perfect band for my ears at that time. Since their last album, 2008's "Blooddrunk," I've since grown a bit tired or them, not listening to as much melodic death metal as I used to, but why not listen to this new album at least for old times sake.
While I can't say that I am the biggest fan of Bodom, I can still recognize a few things about them that I think are pretty clear. The first is that no matter what anyone says, Alexi Laiho is a great guitarist, maybe not vocalist, but he can certainly rip with the best of them; and the same could be said of keyboardist Janne Wirman. Secondly, I believe that these guys and DragonForce helped bring modern power metal into the US and introduce it to a younger generation. Finally, the band have influenced countless numbers of modern metalcore and melodic death metal groups that now feel the need to have a power metal part come in, whether it's needed or not.
But onto this album, I personally don't think it deviates too much from the band's trademark sound, but it is a bit more melodic, compared to the last one, it's not as heavy. Tracks like Shovel Knockout and the title-track, Relentless Reckless Forever, definitely don't deviate too far from what the band have done in the past, but it's a lot more modernized, the band even said that this album sounds a bit more American since it was produced by Matt Hyde. I'd definitely say that this is more melodic death as oppose to thrash or power metal, though I won't deny their presence on here, hear Ugly.
Overall, I can't really say this is too different from other Bodom records, it doesn't wow me, but it isn't all bad. This isn't the album to make me want to listen to everything the band has put out, but it still has a handfull of cool songs. If you're a Bodom fan, you'll probably check this out regardless, but if you're interested in the band, this wouldn't be a bad album to check out.
Overall Score: 7
Highlights: Roundtrip to Hell and Back, Relentless Reckless Forever, Northpole Throwdown
Posted by maskofgojira at 6:41 AM