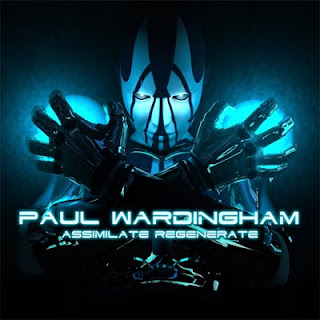 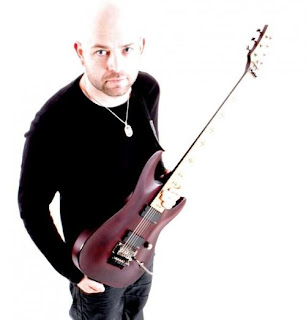 In recent years, the concept of guitar oriented solo artists has become more and more prominent. Unlike the scene back in the 80s, artists like Yngwie Malmstein and Marty Friedman, newer artists take songwriting and production to a higher level than just technical proficiency. Paul Wardingham is a guitarist I had stumbled across when I was looking for Scar Symmetry guitar covers and he has gained quite a large following from them.
I think it's obvious from the sound that opens the title-track, Assimilate Regenerate, that Wardingham takes more than a little influence from Scar Symmetry. Fans of that band's 2008 album "Holographic Universe" will definitely welcome this into their collection with open arms, as most of what's on here could easily be considered a sibling to that album. Filled with melodic and catchy guitar playing, technical soloing, spacey keyboard effects, and polyrhythmic drumming it's not a shocker that this is also being lumped in with the whole djent/tech metal scene as well. As with every Scar Symmetry album, you also have the unnecessary, totally awesome, power ballad of Fields of Utopia.
Wardingham has mastered a lot of different playing styles, and besides the aforementioned and most obvious comparison to Scar Symmetry, influences from 80's hard rock can be heard in the main melody of Futureshock, Meshuggah's djenty groove on Mindwarp, early thrash metal for Cyber Warfare, and even a bit of synth-pop, or something along the lines of 80's keyboard worship, on Clones, and pretty much the intro to every track on here. His playing on here is impeccable, though that's really a matter of personal taste, seeing his ability to make melodies sound like solos in and of themselves really demonstrates how capable of player he is, as the melodies are still just as catchy as they are technical.
Overall, I think it's obvious that I enjoyed this record. I think the only thing that hurts it is the lack of a vocalist, though it's probably just the similarities to Scar Symmetry again that make me long for those soaring vocal hooks. If you like melodic, progressive, djenty instrumental metal, look no further.
Overall Score: 8.5
Highlights: Ghost In The Machine, Enter The Metaverse, Orbital Decay
Posted by maskofgojira at 8:04 AM