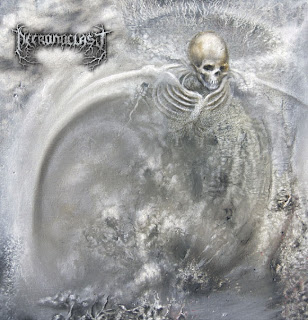 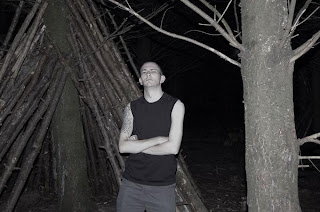 Despite releasing three albums prior to this one, I have not encountered Ncronoclast before in my listening through black metal. It was only through this cover that I actually even decided to look into it. From what I understand about him, this one man band creates some more atmospheric and melodic, both in a traditional sense, black metal.
After listening to this album, I can say that the assumption of this being a lot more traditional rather than unique or inventive would be a correct statement. You have all the trademark sounds on here, a raw and atmospheric production, fuzzy guitars that sound straight out of the Xasthur playbook, hoarse vocals, and programmed drums that don't do much for the record's feel. Most of what's on here is either fast to mid-paced, not really venturing into slower territory, not that that's a problem with this style. I wouldn't call anything on here bad or offensive, but it's just a unoriginal and a bit boring at times, hear Ravenous.
At times there are some great, and original, ideas used, the title-track, Ashes, being a good example, and once again I'm new to this project so forgive me if this is something he's done before, but his use of growling vocals on top of a more melancholic and slower black metal riff definitely sounded cool to me; and while the idea of acoustic interludes isn't an original concept anymore, it definitely worked for the better in Ghostways. But unfortunately, a few moments of greatness don't make up for most of this album lacking originality. Though that's not to say I didn't enjoy most of these songs, as there were very few moments that were boring or uninspired.
Overall, this is a decent album, nothing great, but still good. I could definitely see others liking this a lot more than me, but I still enjoyed a fair portion of these tracks. If you like black metal that is fairly adventurous, but still very kvlt and trve sounding, check this out.
Overall Score: 7
Highlights: Looking Glass, Ashes, Kajicnické Ðaty
Posted by maskofgojira at 6:16 AM