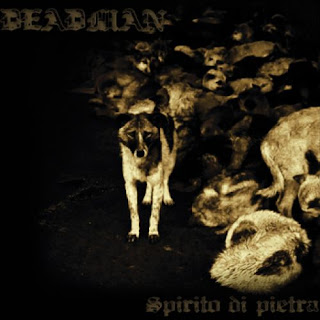 I honestly can't say that I'm all that familiar with the black metal scene in Italy, it's not really one I ever hear from a lot. This is the first release from this practically unknown group so it did intrigue me enough to want to hear it. Coming into it, I have no expectations other than it being black metal.
If you're gonna go by track titles, you're not really gonna have a lot to go on, seeing as every track is a roman numeral, but sonically, I think what's on here is pretty impressive. While the opener, I, is a rather laid back clean guitar intro, II shows the band's true colors by definitely bringing the black metal. Within this one track, you kind of get a bit of everything else on the album, as this turns out to not be just a regular black metal album. Hints of doom and more melancholic clean guitar passages show up on here now and again to change things up from the more common assaults. There's also a use of atmosphere on here that really stands out, on a more epic sounding level than some other groups, but not in a symphonic way.
However, this is still very much a black metal album, tracks like IV or V definitely showcase the bands more primal and aggressive streak. These tracks don't really peak my interest as much as those that experiment a bit more, but do prove to be useful in adding diversity the album. Even the more "experimental" tracks on here make use of the standard tremolo picking style, harsh vocals, and double-bass drumming, so it all makes use of the black metal formula in here at the very least, so all trve fans can relax, this album is still very kvlt.
Overall, I was decently surprised by this album, it's a very solid album with some good qualities about it. While I don't think anyone would call this an original album, it certainly is worth listening to a few times. If you like old-school black metal that takes a step into a more atmospheric direction every now and then, I don't see any reason why you wouldn't enjoy this album.
Overall Score: 7.5
Highlights: II, III, VII
Posted by maskofgojira at 12:34 PM