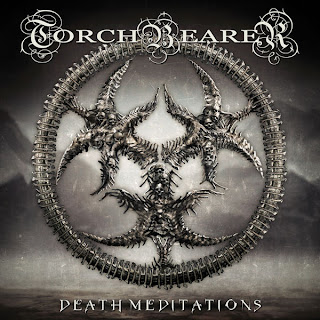 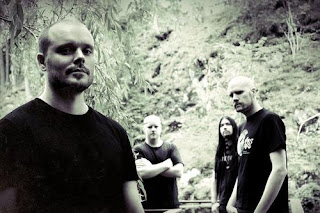 I'm sure like most fans of Torchbearer, I found out about them through vocalist Christian Älvestam being involved with them, as a guitar player. I do realize that there are those that found out about them through other means, but that's just me. It's been close to five years since these guys have released a full-length record, not that they haven't been busy, but it's nice to see them back.
I know I've said in other reviews how some groups take melodic death metal back to a more traditional sound, and I stand by that, I have to say that Torchbearer genuinely seem to have come straight out of the 90's Swedish melo-death scene. Sure, there's a modern production, but it retains that sort of sound, where melody and aggression take equal footing. Riffs take over the melodies rather than the vocals, meaning no clean singing, despite both vocalists, Älvestam and lead vocalist Pär Johansson, having great clean voices. The band also have a black metal influence as well, showcased on Severings. The use of keyboards, despite being clearly heard, are not overbearing and never really take the lead role in a song.
There's a very epic sound to this album, even within opening track Portals, which honestly sounds like something Dimmu Borgir or Cradle of Filth might open with, opens into The Monumentum which is melodic, technical, and grandiose sounding all at once. I found this record to really showcase a lot more of a progressive element to the band's sound as well, with At Takao River and The Aphotic Depths standing out as demonstrating everything that's great about this band. But going back to the epic sound of the album, while I will say that keyboards do play an important part in creating this atmosphere, they only accentuate the riffs that are already being played, which only shows how great these riffs actually are.
Overall, this is a really great release, and despite the long wait for it, it was actually worth it. There isn't a lot on here that's bad, most of it is really good. If you like progressive or melodic death metal, I definitely suggest you check this out.
Overall Score: 9
Highlights: The Monumentum, At Takao River, The Aphotic Depths
Posted by maskofgojira at 9:30 AM