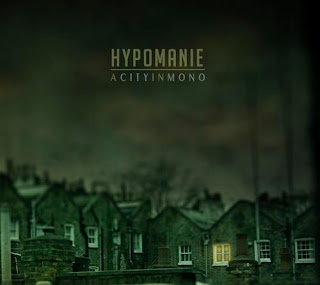 Since the project's inception, Hypomanie has constantly evolved for the better, with each release showing a more and more developed sense of progression. Evolving from a more depressive black metal debut full-length and slowly incorporating elements of post-rock and shoegaze into their sound with several follow-up EPs. This new album also removes the vocals from the equation, which makes the music all the more enchanting.
The five songs that make up this album essentially take from what sole member S. has been experimenting with on his previous two EPs and moves them integrates them into the lo-fi, harsh depressive black metal sound of his debut. With no vocals intruding on this album, all that remains is the guitars to guide you with melancholic melodies that, as mentioned above, recall elements of shoegaze and post-rock. This isn't much of a metal record anymore, you won't find pummeling double-bass, extreme moments of high intensity tremolo picking taking precedence over moods, and while those elements are still here, they don't feel like they're used in the typical black metal format. Even something that could be considered headbangable, it's more of a contemplative and introspective sort of record that will most likely sway you. It's a record where the clean guitars take an atmospheric approach while allowing the distorted guitar to play a main melody.
In a sense, this record could be called progressive, what with the shifting dynamics within all these songs, moving from subtle and sparce to big and open sounding climaxes, hear a track like She Couldn't Find A Flower, But There Was Snow. Every track climbs and falls, going up and down, so in that sense one could call it progressive, adventurous; but on the other hand, you could then argue that this really isn't all that different from groups like Alcest or Svarti Loghin. This honestly lies somewhere in the grey, is it forward thinking, yes, but is it original, not really. I would guess that by his next album, S. will have found the sound that makes him stand out from these other groups, as tracks like the title-track, A City In Mono, or A City In Stereo showcase some glimpses of great potential.
Overall, this is a very solid record, and I enjoyed it. The whole instrumental take on this thing might take the experience of it being "depressive" away from some of his older fans, but this is much more interesting. If you like melodic, post-rock or shoegaze influenced metal, I'd suggest you check this out.
Overall Score: 8
Highlights: A City In Mono, A City In Stereo
Posted by maskofgojira at 8:24 AM