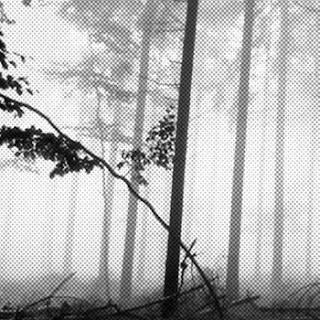 Ayr is a band that has been around for close to two years, yet have already been catching some praise from the underground. Being a band I had only heard and read about recently, as in late last year, early this year, I figured it was about time I checked this duo out. This new EP follows up their well received album back in January, "Eternal Sustain."
The four tracks that make up this EP are excursions in melodic black metal, but making use of plenty of atmosphere. The riffing has a very old-school vibe about it, being very cold and aggressively tremolo picked for the most part, but catchy and dark as well. While it sure isn't original, the performances alone stand tall, definitely worth being noted for. Be warned though, this is still pretty raw sounding and isn't really all that cleanly produced, instead, some short bursts of feedback do come out here and there. While half the tracks on here are fairly straight forward and don't take too many detours, the shortest track, Hallucination, remains the most somber and mellow track on here, despite featuring some well crafted tremolo picked melodies and closer Expiration features a much more epic and atmospheric sound.
Overall, a solid album, nothing groundbreaking, but what's on here is done well and is surely entertaining. There were some parts that were pretty cool, but some that were also pretty average and didn't stick out. I could definitely see fans of more underground oriented black metal really digging this, so check it out if you haven't.
Overall Score: 7
Highlights: Starvation, Expiration
Posted by maskofgojira at 8:56 AM