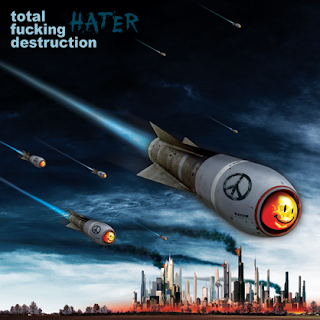 Side project of Brutal Truth drummer Rich Hoak, TFD is a blistering aural assault of old-school grindcore and punk. Despite never really checking out this project, I don't think any fan of grindcore isn't familiar with his main band and what he does in there. Short, aggressive, and unrelenting, that is TFD.
This album holds twenty-seven songs that add up to a shocking twenty-seven minutes in total, so there's no fooling around on here, you get short bursts of speed that knock you down, pick you up, and then punch you in the groin. This is grindcore and punk to the extreme, but like I said, it's done old-school, where playing fast doesn't take priority over playing riffs. I wouldn't call this record melodic, but a lot of riffs on here are quite catchy and actually recall elements of old-school heavy metal bands, hear tracks like Everything You Need But Nothing You Want or Murdernumber, which is something that definitely stood out on here. But if you want nothing but speed, tracks like If 9 Became 6 or Attack of The Supervirus 2049 should satisfy that need for speed.
This album is not above taking things at a normal pace though, as tracks like I Not Prose manages to be the album's longest track, coming in at just over three minutes. There's plenty of full-on blast-beat styled songs on here as well as more mid-paced and melodic tracks, which gives the band a unique style of playing, since it's not based around speed and aggression all the time. The vocals follow along with the different styles, as there's brutal death growling, high pitched screaming and yelling, talking, and sometimes even a Devin Townsend sounding scream, in Repeat Repeatedly. Though variety is important, I think that if you listen to TFD, want you want to hear most is some brutal sounding grind.
Overall, I'd call this album successful at what it does, blast your face off. I would definitely call this grindcore, but it's also got a lot more melody than a lot of modern bands. If you like heavy metal, crust punk, or grindcore, definitely check this out.
Overall Score: 7
Highlights: Hate Mongering Pig Pandemonium, Repeat Repeatedly, Meat Without Feet, Lovegrinder
Posted by maskofgojira at 12:48 PM