Totalselfhatred - Apocalypse In Your Heart (2011) 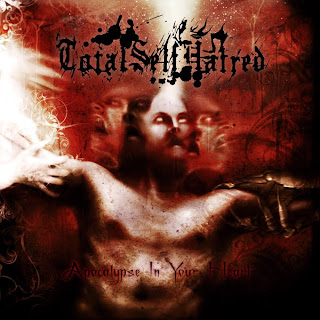 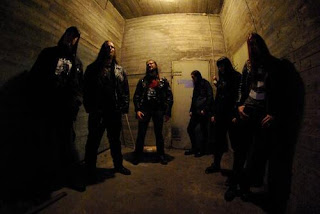 Totalselfhatred is a Finnish blackened doom metal group that was actually one of the first releases I remember reviewing. After three years of waiting, the follow-up has finally been released. I've had this album for a little while and I've finally been able to digest it some so I can give a decent perspective on this.
The three years obviously gave these guys a chance to improve their craft, as most of the songs on here are shorter and feel like they would work well, IE. opener Apocalypse. But I'm not saying that these guys are abandoning their atmospheric black-meets-doom metal style, because this album still doesn't go as fast as a lot of other groups, even though it does use blastbeats. The progression on here is also a lot more obvious in the different varieties of playing styles they use on here, from traditional black metal, to more progressive elements, and even the more post-metal/rock parts used at times. There's a greater use of all three vocalists on here than on the debut, as having all three guitarists provide vocals does add something unique to the harmonies on here.
I found that when the band made use of slower or more mid-tempo sections, it worked to their advantage, hear tracks like Ascension. Though the whole record doesn't always maintain a regular tempo, it's very well crafted to stop it from becoming monotonous, there's are parts with blasting and there are parts that are more laid back. Tracks like Teardrop Into Eternity definitely has the most technical sort of feeling to it while I personally found tracks like Anything and Cold Room Starstained to be much more engaging, as they build a lot more and make use of a lot more of "progressive" sort of mentality. In most cases I would definitely say this is a more engaging listen than the debut, but I have read some comments where people have said the production on the debut fitted the band a bit more, and all I can really say about that is that, the record as a whole doesn't quite have as nice a guitar sound as the debut did, but whatever.
Overall, I really enjoyed this album, it really has a nice flow to it, which is something I always like in albums. While the production is decent, I could see these guys going a little bit cleaner, it doesn't hinder the impact of the songs themselves. If you like atmospheric, slightly progressive-tinged black metal, definitely check this album out.
Overall Score: 8.5
Highlights: At War With Myself, Anything, Cold Room Starstained
Posted by maskofgojira at 8:56 AM