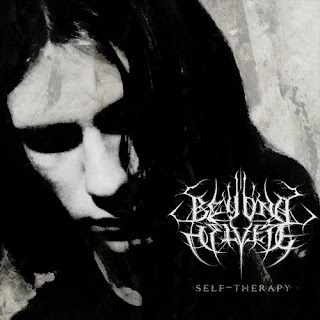 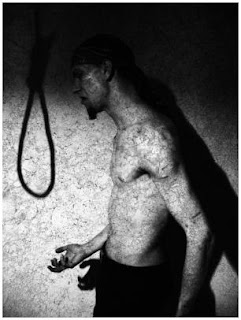 You'd think that at this point in the game, the whole "I'm going to kill myself picture" should have gone out of style, but I guess not. From experiences with other depressive acts, like the post accompanying this one, I don't come into records of this style with a lot of high expectations. I figure that this guy's from Germany, a country who's black metal scene is really thriving right now, and he's in a few other projects that are a bit more traditional, so why not see what this debut has to offer.
The first thing that becomes noticeably different about this project compared to so many others is the vocals, they are incredibly twisted and painful sounding, but in a good way. They're not the typical screams or howls in pain, instead they sound like someone going between a death growl and a horrified scream. It's incredibly unique sounding and unlike that of any other vocalist I've ever heard. Secondly, the music itself recalls more of a Shining (Swe) type of vibe, or a more traditional sort of black metal style rather than the typical monotonous droning of most groups, in other words, there are actual riffs on here. Come to think of it, Sven Krause's vocal style on here can also be drawn to Kvarforth's vocals somewhat as well.
The six songs on here move through somewhat progressive oriented black metal, still in the vein of Shining, but is perhaps still more rooted in a doomy sort of core and thus doesn't ultimately move into ripoff territory. Tracks like the title-track, Self-Therapy, definitely shows a more doomy influence that may or may not show hits to artists like Nortt or Bethlehem. This album also does have more than it's fair share of brutal parts, not like death metal, but parts that just groove and can make you want to headband, hear Confession. Even the instrumental track, A Nameless Desire, proves to outdo what most projects and bands in this genre do, make instrumental sections sound cool while keeping it dark.
Overall, this album definitely gave me what I want from this genre. It's not often that bands from this scene come out and do something original or uniquely their own, but this does it. If you're into depressive black metal that isn't cliched in the way of groups like I'm In A Coffin, than check this out.
Overall Score: 8
Highlights: Soul Reflection, The More I Know
Posted by maskofgojira at 10:27 AM