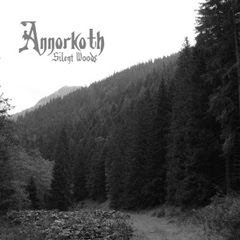 I think by now, the whole depressive black metal scene is something that's pretty much been explored and done to death. All these one man bands never seem to really go anywhere new, even bands that are starting up have little new territory to explore. What intrigued me about this one that was that it was an all instrumental project, so it might be a bit different.
Without the intrusion of howling/shrieking vocals, I can safely say that this is worth hearing if you're into this sort of stuff. It really has all the right elements, it's lo-fi, minimal and repetitive, features some more lengthy pieces, and it wears its influences on its sleeve, IE. the Xasthur and Darkthrone covers. It holds everything that would make a depressive person feel down in the dumps, but it takes more than that to make a good record, or band. The title-track, Silent Woods, even brings in more of a melodic approach that should definitely please all those post-punk fans that love depressive music.
Lo-fi music is often a hit-or-miss for me, as I'm sure it is for a lot of people, and unfortunately there were some production choices that really stop this from being good. The cymbals are probably my main beef with the album, as they are way too loud, and often sound blended together into a high-pitched crash that ultimately topples over everything else in the mix, hear In The Mist. Secondly, there isn't enough atmosphere on here, in my opinion, or maybe it's just the wrong atmosphere, because it doesn't ultimately feel as dark and morbid as it does noisy and cacophonous. In all honesty, and this one really goes for most band's in the genre, and I know I'll probably repeat this in other reviews, but the repetition on here most certainly could have been cut down, there's a difference between someone playing a riff for several minutes than moving onto another riff, and someone who plays two riffs for an entire song, as in intro riff and outro riff is one, and middle riff is two, hear Mystic Forest. Yet, it somehow seems fitting that the Darkthrone cover of Transilvanian Hunger is the most alive track of all ten on here.
Overall, this is a pretty dull album, it really doesn't do as much as I had hoped it would, but I guess those are the breaks. I couldn't break through the monotony of these tracks to find anything worth penetrating further for. If you're into this style, maybe check it out, but otherwise it's not really necessary for your collection.
Overall Score: 3
Highlights: Drowning Into Nothingness, Silent Woods, The Sun Sets Over The River
Posted by maskofgojira at 7:53 AM