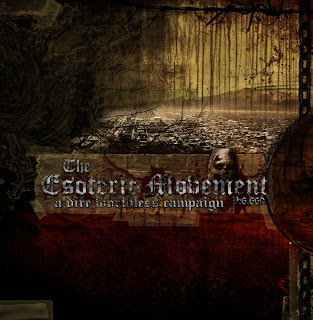 I remember a few years ago I was looking through Metal Achieves trying to find some interesting bands, and I came across this one. Their debut EP had some really cool and interesting moments on it, but I can't say that I've gone back to that since originally finding it. Upon seeing this new release, which is the follow-up to their debut, 2008's "A Blasphemous Light In The Austere Centuries," I decided to give it a shot and see if I like this any better.
From the second song onwards, because the intro is just an ambient sort of track, there is definitely some melodic blackened death metal going on. It's a sound that definitely has a clean and almost militaristic vibe to it, hence the industrial elements, that try to make it sound all epic at times, but the real trick is in it's ability to use guitar melodies as the real hook. At times, the guitar melodies go into an almost heavy metal sort of style, something that makes me think of Iron Maiden, which really grabbed me, hear the semi-instrumental Summoning The End. However, there are also plenty of other elements in here, including thrash metal, touches of symphonic metal, and even the occasional progressive moment, hear the epic Vulgar Pleasantry of Flesh.
Overall, this really impressed me as to how good it actually was. I could see some not really liking the industrial picture this album portrays, in the sense that the music feels more industrial than it actually is. If you like some melodic extreme metal, definitely check this out.
Overall Score: 8
Highlights: A Neurotic Quintessence, Vulgar Pleasantry of Flesh
Posted by maskofgojira at 9:09 AM