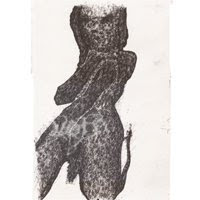 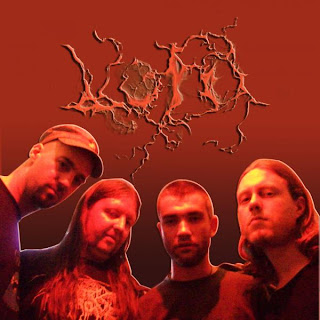 Void is a band that some underground black metal fans might know, as they once contained cult vocalist Kvohst as a member. This is the project's first album in almost eight years, the first without Kvohst, and their second overall full-length. Featuring a new line-up, this new album features a different sound from their debut.
Sonically, this album blends together a primal sounding black metal, with some glances and nods to industrial and electronic music as well as some death metal. Most of the industrial elements aren't really as prominent or unique enough compared to the debut or even groups like Control Human Delete or Dødheimsgard, so it was actually pretty hard for me to even consider this to be an industrial album, though tracks like Where Red Limbs Stir or Feral do feature some moments that might call back to industrial music, it just doesn't cut it compared to the groups listed above. The overall vibe is much more traditional sounding than other groups, but still pretty left-field and dissonant at times, Cypher for example.
Production wise, I found this album to just not do it for me, it just didn't have that sterile feeling I like to hear from industrial influenced music, it's too raw. I'm sure people that enjoy more of a black metal sound will probably get more out of the sound of this record than I did, but it just sounds so plastic and raw at the same time. The sound was just so hollow sounding to me and it really ruined the album for me. I realize I'm kind of using some conflicting words here, so I'll elaborate and try to help clarify, for those that don't really understand, this record isn't polished enough to sound modern when compared to other industrial groups, but the atmosphere that is on here just feels so hollow and unnatural, which ended up making me fell uncomfortable throughout most of this record.
Overall, I really just couldn't get into this record at all, I found it very uncomfortable and at times bordering on boring. While there were some worthwhile moments, don't get me wrong there were a few decent tracks on here, but I just didn't dig this at all. If you want to hear some raw, industrial black metal, check this out.
Overall Score: 4.5
Highlights: Ego Tranquilizer, Cypher, Exempt
Posted by maskofgojira at 11:49 AM