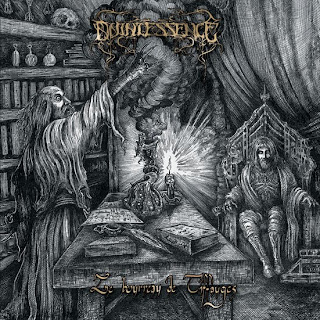 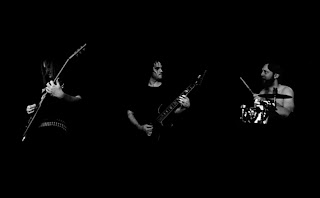 In all honesty, I think that even if a band doesn't know a thing about alchemy, it makes a really cool front cover. Hence, the reason why I wanted to check this out, that, and they're from France, which has a blossoming black metal scene right now. Featuring members, and ex-members, who've played with Sael, Angmar, and Manzer, these guys at least know how to play the genre well.
I find it's hard for a band that is trying to be different to actually achieve a sound that is their own, while there are clearly some bands that have worked at it, others either don't have the desire to sound original or unique, that's not the case on here. What I found on here, through these seven tracks is, yes, black metal, but one that explores enough of a melancholic ground without sounding like another. It's melodic and a bit progressive in a sense, but it's also very dour and atmospheric as well, while retaining it's speed. It's able to be doomy and slow, but also fast and piercing, it's a bunch of overused and tiring ideas melded into a much more unique style of songwriting, hear opener 1404.
With all that said, I found that this record didn't paint an overly cheerful painting, with a lot of dark and twisted imagery kind of floating in and out of my head as I listen to it, not that I ever expect the former from a black metal album to begin with anyway. I think it's just the lack of beauty in here, maybe I've just grown accustom to groups adding in a little bit of clean guitar work to brighten the picture. While tracks like Le Brasier Des Braves kind of goes into a style that is more traditional, I found tracks like Carnation to be much more intriguing and engaging due to a more melodic and atmospheric performance.
Overall, this is a really cool album with more than a few good songs. While I feel that the production could have been a little bit louder, the performances themselves are well done. If you like black metal that's a little bit adventurous, but also very kvlt, definitely check this one out.
Overall Score: 8
Highlights: L'or À La Croix De Sang, Vos Obsecro, L'oriflamme Des Ténèbres
Posted by maskofgojira at 9:04 AM