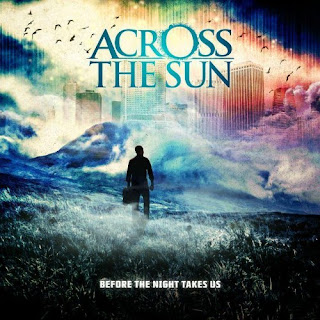 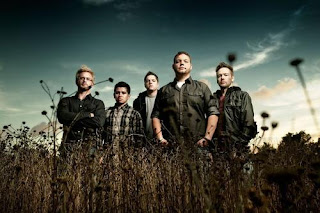 When metalcore first came out, I think it was something that was accepted by the underground, with groups like Converge, Keelhaul, and Coalesce, but modern bands that take influence from melodic metalcore groups like As I Lay Dying, Killswitch Engage, and Unearth, the genre has really gone to hell in a hand basket. Modern bands playing metalcore are more often than not, mocked, and for good reason, for them deciding to play a style that's been done to death. Across The Sun has drawn numerous comparisons to those groups as well, but apparently has something different that's making people take a second look at them.
The comparisons to Killswitch Engage are fairly obvious on here, with the clean vocals even being compared to a less gruff Howard Jones. Beyond that, you can hear plenty of modern sounding metalcore and melodic death metal sounds on here, you have the slick sounding production, the harsh/clean vocal switches, In Flames and Soilwork riffs, and forays into electronic music, you even have the Children of Bodom influenced keyboard solos, hear Song For The Hopeless. I actually found the growling/screaming vocals to come out better and more impressive than the cleans, which essentially ruined otherwise good tracks like Ghost of Grandeur and Blessing In Disguise for me. Though I'll give the soft instrumental A Moment of Clarity a bit of praise for doing just that, giving me a track that was actually decent.
Honestly, it's not that impressive, most of it could be found in other groups performing a similar style. For me anyway, it's hard to kind of distinguish this band, this album, apart from other bands playing a similar style, there really isn't anything that really stuck out as a definable factor to me. This might just be me, but I'm actually sick of all these new bands trying to sound epic and huge by adding a lame symphonic keyboard in under the guitars, hear the title-track, Before The Night Takes Us, it's something that I just can't stand, when it's done in a mediocre way anyway. In all honesty, the difference between this band and all the groups listed above, though I can't say I'm a huge fan of any of them, is that at least those band's could write a song that was either catchy or memorable, something I really didn't find on here. Though I wouldn't even say any of this is boring or bad, it's just incredibly dull and uninteresting.
Overall, this was a pretty boring release that really didn't do much of anything for me. From what I had read about this band and release, I really expected better. If you like modern melodic metalcore, you'll probably really like this, but otherwise, there's not a lot worth hearing on here that you haven't heard elsewhere.
Overall Score: 3
Highlights: Seasons, Ghost of Grandeur, Belay My Judgment
Posted by maskofgojira at 7:58 AM