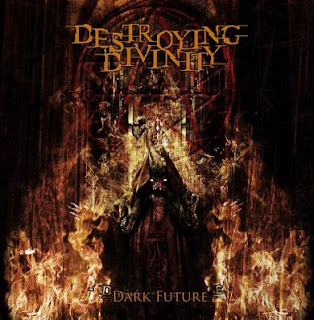 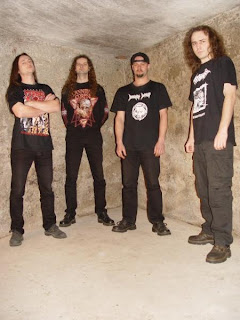 I normally probably wouldn't review something that came out last year, but since the band themselves asked me to, I figure no one would fret over one review. Apparently these guys, despite releasing this last year, got almost no press for it due to their label. While this isn't the first band to have label problems, at least they're trying to get out there.
The band had told me that they take influence from groups like Incantation, Morbid Angel, and Immolation, all of which are clearly heard on here, though some take more precedence than others do, obviously. It's a sound that doesn't rely solely on brute force as most death metal does, but takes atmosphere into account, often at the expense of a tighter, and more brutal sound. What's heard on here though is a solid mix of the two, there's plenty of atmosphere, but the band definitely have a more brutal death metal sort of sound, the drums are almost always pounding and blasting while the vocals are low and guttural.
Throughout the record, as most bands that site the above bands as influences should, there's a use of different tempos, ranging from more doomy to tropical grinding. While I have always found that death metal bands that make use of at least a bit of a doomy section or two to be far more interesting than bands that constantly grind, these guys do both solidly, but tend to stick to a more mid-paced sort of groove most of the time, hear a track like Putrid Stench of Past. Now, I would definitely say that this album favors groove over melody, Prophecy, and technicality, Undead In The Darkness, though flourishes of both can be found on here, they don't overwhelm the listener enough to really make them a technical death metal band or a melodic death metal band. I can safely say though, that at least I preferred the more mid-tempo groovy tracks as oppose to those that maybe showed off a bit more.
Overall, this is a solid release and one that definitely should have gotten more attention. There's plenty of variety on here, and it holds a better sense of talent than most groups, as atmosphere and groove in taken into account on here. If you like old-school death metal with a touch of the modern, check this out.
Overall Score: 8
Highlights: Birth of A Faceless Killer, Cult, Name Written With Blood
Posted by maskofgojira at 10:40 AM