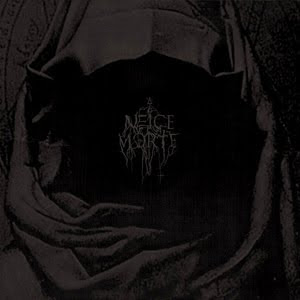 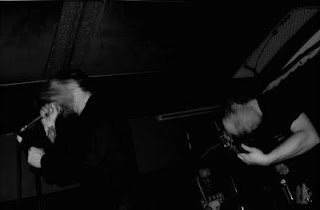 From the moment I saw the cover of this album, this being probably back in the middle of January, I knew this would be something I had to hear. The bleakness of this cover just made me instantly try and find this thing. I'm sure I've said that French black metal is putting out some of the most original stuff in recent years.
Despite the initial shock of having to wait about four minutes for actual music to be heard, what came out was much different than what I thought it would be. Having a much more raw production value and a sound that really had a sort of frenetic sort of energy, not playing style, but kind of felt like it was about to suddenly go off the deep end at any second. Honestly, throughout this album, there's an almost overwhelming sense of atmosphere, and one that recalls the more psychotic realms of industrialized collapse that The Axis of Perdition do with their stuff. It's kind of quazi-industrial soundscapes that don't quite capture as much darkness as much as an overwhelming sense of uneasiness, or at least that's how I felt.
I honesly wouldn't say a person should come into this wanting to hear expert musicianship and brutal assaults on their instrument, a track like Tout Sonne Faux sounds like random bursts of industrial sounds playing with random screaming and weird guitar melodies. It's psychotic in one sense, and totally original in another; and I could actually people calling this a load of crap due to it's almost random compositional style. It's very avant-garde and progressive without exhibiting any of the normal traits one might associate with metal. I actually hear just as much, if not a bit more, Throbbing Gristle than Mayhem on here. Black metal songs, like real ones, don't even really come up til the last two songs on here Fausse Victime/Vrai Bourreau and Bourbier, though there's plenty of black metal sounding sections on previous tracks.
Overall, this was a release that totally surprised me, from the cover, and little information I had heard about it, it was almost completely different. It's got plenty of originality, but I think it's still got a little bit of work before they become a group that will be respected. If you like industrial, ambient, avant-garde black metal, definitely look up this album.
Overall Score: 8
Highlights: Réflexe Post-Mortem, Fausse Victime/Vrai Bourreau
Posted by maskofgojira at 10:57 AM