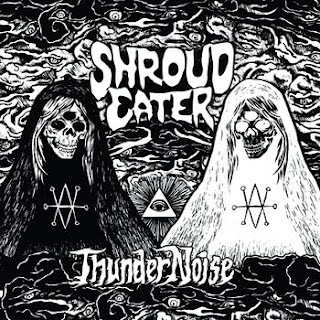 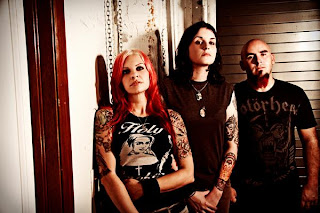 Doom metal isn't a genre that I'll typically associate with girls, but more and more, women seem to be coming into even this genre of slow, down-tempo music. Florida isn't a state that I think sludge as coming from, but I guess even the murky fuzz can reach the sunny rays that dominate there. These two odd occurrences are what attracted me to this underground group.
Covered in fuzz, recalling sounds of Black Sabbath, early Neurosis, and Electric Wizard, just to name a few, this album should please fans of slow, heavy metal. In terms of production, the fuzz on here can be a bit disorienting, like on opener High John The Conqueror, where the guitars and bass are so distorted that they can turn into a very muddy sound. While the sound of it is still very raw, it's still clear enough, being a trio helps this though, all the instruments do come out and can be heard fairly easily. Vocally, it's not really my thing, but the low howls aren't all that prominent on here to pose a big problem.
This is a fairly short album compared to a lot of sludge and doom, with eleven songs, most of these tracks are about four minutes long. The occasional outside influence comes in here and there on here as well, Shark Valley feels more like post-metal than sludge or doom, while We Are Beasts definitely has a more punk flavor in it's recipe than other tracks. While the beginning of this album was extremely based in doom, I found the second half to really focus on the sludge side, often going into more mid-paced and punk sounding parts, hear tracks like Oubliette or Sinister Hunt.
Overall, this was a decent release, it definitely has potential to get better from here. The experimentation between including some mellower parts along with the heavier and sludge parts definitely worked in their favor and I wish there had been a bit more. If you like loud, distorted, sludge/doom definitely check this out.
Overall Score: 6.5
Highlights: Vesuvius, We Are Beasts, Baying of Jackals
Posted by maskofgojira at 7:16 AM