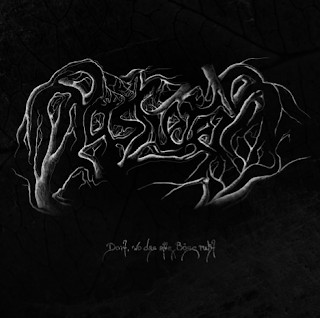 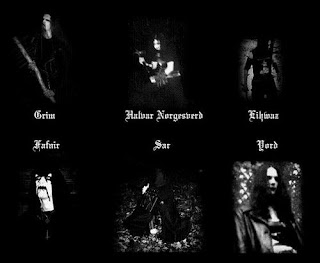 I'm actually surprised that I knew about this band before checking this album out, granted, I obviously forgot about them. From the little bit that I had read about this album, it seemed to have a pretty cool sound, with one member actually being dedicated to acoustic guitar. With that also came the surprise that this sophomore effort is actually not on a label.
Now, if you're coming into this under the impression that there's going to be some folk influenced parts where there's acoustic guitar, flutes, and the like, chances are you're going to be disappointed. Sure, the use of an acoustic guitar, in this band's case, means that there certainly are sections on here that are based solely around that acoustic guitar, but that's about as far into the folk realm as you're gonna get on here. The main style on here is black metal, done in it's standard sort of style, where you have lots of double-bass drumming, fast and melodic tremolo picked riffs, and high-pitched screaming vocals. There's also the more atmospheric side to this group that enable them to venture into tracks that aren't dominated be only aggression, hear Dort, Wo Das Alte Böse Ruht.
Granted, all the above is true, but there's also some things that do stand out on here that I don't hear on some other standard black metal releases. The first thing that comes to mind is the presence of the bass, as it's quite clear in the mix, providing a nice foundation for the rest of the band to build on top of, there are even some bass lines that sneak through into the foreground as well, hear tracks like Die Waldteufel and Der Schwarze Wald. The second thing are the vocals, most are done in the typical black metal screaming fashion, but there's also some singing, some raspy talking, and some gurgling on here as well. Though I don't think I can defend the cliche sounding vocals on Pestritt Zu Hel, which definitely sound like they belong on a depressive black metal album as oppose to this. The final point is that as the album progresses, the band get more adventurous, though it's kind of given seeing as this was recorded from 2005 to 2010, it certainly brings a welcome shifting point to the album.
Overall, I'd have to say that this was a solid release, it definitely has moments of greatness. This isn't groundbreaking stuff by any means, but it has some really cool songs that are well worth checking it out for. If you like atmospheric black metal, or pagan for that matter, definitely consider looking into this.
Overall Score: 7.5
Highlights: Die Waldteufel, Der Boshafte Geist, Als Der Blick Erlosch
Posted by maskofgojira at 8:15 AM