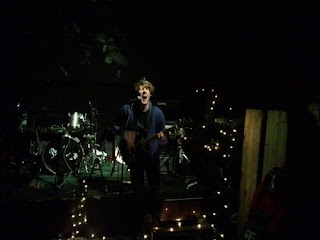 I remember reviewing the first release from Sleeping Peonies last year and thinking it was decent, but some reviews I've read of this new album says it's improved a lot. Apparently this new release has them moving into a less metal direction, which was something I think I mentioned in my review before. Though I'm not a huge shoegaze fan, it's something I can certainly appreciate.
From the opener, Anomie, the band definitely show a more focused sound, less simply wandering sounds, and more direction. The distortion, lo-fi production, and screamed vocals remain, but the instrumentation and atmospheres recall a more poppy sensibility, and this goes for the entire disc not just this one song. While I personally found the vocals a bit irritating, the atmospheres and overall performance instrumentally was actually really solid. Tracks like Wicklewood Haze or Autumnblood and Lavender have some really captivating sounds on them, something that really drew me in. I also really enjoyed the nice piano sounds used on here as well, they proved to be more of an upbeat style rather than a melancholic one.
Overall, I actually enjoyed this quite a bit, it's not something I could see myself listening to on repeat, but it's certainly a step up from their first release. The atmospheres are definitely where I see the band's strength lying. If you like shoegaze, atmospheric, or black metal, check this out.
Overall Score: 7.5
Highlights: Pashmina Veils, Black Lanterns
Posted by maskofgojira at 6:31 AM