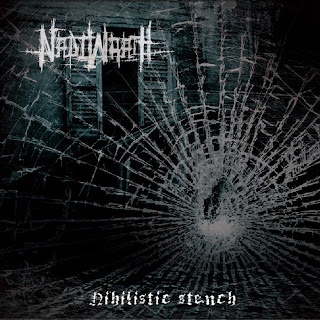 Featuring members of groups such as Dodsferd, Stellar Darkness, and Cross Denied, you can imagine that Nadiwrath isn't going to be something you put on before Sunday Church service. It's actually quite the opposite, as these guys make no attempt at trying to play it safe, it's all dirty and brutal. In essence, it's black metal covered with grime and piss.
I think when you open an album with the words "Fuck you," you should know that you're not gonna get anything friendly or easy going. Opener Darkness Has Lost Its Meaning definitely showcases the band's unique sound, mixing melodic black metal with crust punk aesthetics and aggression. It's a no holds barred album where you kind of just have to let it take you where it needs to, cause it doesn't care if you fight it, it will still tell you what to do. Something that did pop out to me however, was the lack of "atmosphere" on here, it didn't have that sort of haunting darkness lurking underneath the surface like a lot of black metal bands do, instead, it has a more barren sound behind the instrumentation, which unfortunately left me a bit cold.
In a sense, this is a more playful, lighthearted sort of sound when compared to the members main projects and bands. Like I said above, there isn't that darkness bubbling underneath the surface, there is just a raw, primal punk rock assault, hear tracks like Another Pimping Whore or Eyes Full of Vengeance. I did find the bass on here to fit that sound though, being very bouncy and giving the band that sort of old-school sound. Probably one of the few times that the band fully embraced the black metal sound was on the closer Memories Are Dead, which is a much more mid-tempo piece for most of it's duration, but still contains plenty of that tremolo picked, 90's black metal riffs.
Overall, this was a refreshing listen, despite not having an atmosphere that I usually enjoy in black metal, it made up for it with it's total embrace of punk. It's a total fuck you to anyone that likes the traditional way things are done in black metal. If you enjoy punk, crust, black metal, or 80's hardcore, I'd definitely check this out.
Overall Score: 7.5
Highlights: Horns, There Is No Light, Memories Are Dead
Posted by maskofgojira at 11:46 AM