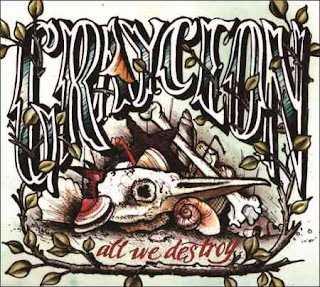 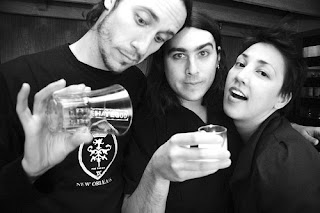 I'll be honest and say that despite all the critical acclaim that 2008's "This Grand Show" got, I just didn't get it. This California trio was well praised for their unique sound that, even I admit I understood that much, but just couldn't get into it. Since hearing that they signed to Profound Lore and hearing a promo-track, I decided to give this band a second chance.
The band's sound, as I stated, is unique, with Max Doyle on guitar and vocals, Zack Farwell on drums, and Jackie Perez Gratz on cello and vocals, all coming together into an odd blend of styles. The mixture of heavy metal, prog rock, classical orchestration, post-rock, and jazz all blends into a thick wall of sounds that all sound good together. It's all done melodically in a way that definitely harks back at times to old-school heavy/early-thrash metal, hear Shellmounds; but there's also a more tranquil ambiance that surrounds the album, the sort of thing that you might hear from classical music, but this is most likely due to the cello's presence on here.
In a sense, the production on here is a bit raw, putting the guitars and cello up at the top of the mix. The vocals, mostly performed by Gratz, have a weird effect on them that make them feel very robotic, to me anyway. But as far as performances, I think it's all done really well, especially on the epic We Can, which is easily the most progressive track on the album, having several ups and downs throughout it's course. Other tracks such as Dreamer Deceived or A Road Less Traveled feature a far more direct style of playing, compared to other points on the album. But I personally perferred the softer, more delicate, sounding parts, like War's End for example, which is actually quite uplifting sounding.
Overall, this is a decent album, unique, but it's still not entirely my thing. I definitely enjoyed what I heard on here, but it wasn't mind blowing or anything. If you like interesting, progressive metal music, I'd recommend this to you, you'll probably get more out of it than me.
Overall Score: 8
Highlights: We Can, War's End
Posted by maskofgojira at 7:26 AM