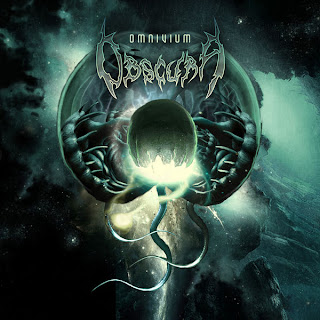 Well here it is, probably one of the biggest and most expected metal releases for this year, the follow-up to 2009's breakthrough "Cosmogenesis." Obscura is a band that have been critically acclaimed for their technical playing, catchy riffs, and uniquely progressive sound and this album only expands that further. From the reviews I've read, people are already calling it one of the best albums of the year already.
Within just the opener, Septuagint, it already shows how much the band have improved over their last album. First off, the intro to the song makes use of acoustic guitar, something that definitely shows up again later on the album, which definitely adds a greater sense of dynamics on here, as keeping it consistently heavy all throughout an album can make things a bit stale. Then the greater use of melody is noticeable within the first riff, it's technical, no doubt, but throughout the record the riffs used are far more melodic than what appeared on their last album. Clean vocals also mark an appearance on here, and on some other tracks on here as well, and really show how much Steffen Kummerer has improved as a vocalist, as the singular nature of his vocals were one of the few things that hindered their last album.
The rest of the album doesn't let up either though, showing the band constantly improving on all fronts. Bassist Jeroen Paul Thesseling always having his place be known with his playing is not as dominant on this album as he was on the last one, and by that I mean that the bass playing is not as in your face, there are several times when it falls back into the background and doesn't take a lead role. Drummer Hannes Grossmann is once again great at proving groove while still never making his role sound simplistic, hear a track like Ocean Gateways. But guitarist Christian Muenzner is obviously no sloucher on his end either, and it wouldn't be fair not to mention him either, as his playing on here is equally fantastic, how can we forget the diversity he and Kummerer help to add to this album, whether it's the atmospheric elements on Vortex Omnivium, the more fusion influences that come through on Prismal Dawn, or the more left-field playing that comes on Velocity, they know how to get things done. Though album closer Aevum is definitely the song closest to their last album, so fans of the more brutal sort of assault should be pleased with that one.
Overall, I can't help but agree with all the good praise I've read about this album, it's just as great as I've heard. This is definitely a game changer, and I hope other groups will take notice as to how these guys do things and start improving themselves. If you like forward thinking death metal that recalls elements of classic groups while sounding totally original, check this out.
Overall Score: 9.5
Highlights: Every Track Is A Highlight
Posted by maskofgojira at 7:59 AM