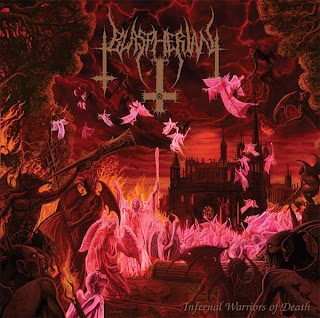 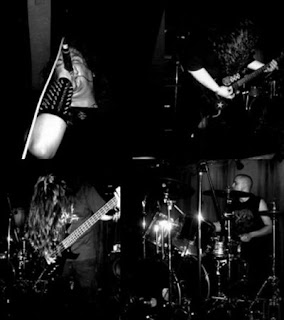 When it comes to death metal, I prefer groups that are either of the older kind or groups that have a bit more of an older influence or sound to them. When looking at the cover of this debut album, the only thing that came to mind was the cover of Immolation's debut "Dawn of Possession." I'm pretty much checking this band out on that credit alone.
Yes, there's nothing remotely modern about this album whatsoever, so if you're hoping for some well-produced death metal, look elsewhere. This album is pretty raw, sounding like it came right from the late 90s. As far as influences go, things like Incantation, Immolation, Deicide, and maybe a bit of Disembowelment as well, all coalescing into a very dark and primal sound. I wouldn't call a lot this album doom influenced, but there's plenty of moments that feature some slower parts, hear Sworn to Death and Evil, that definitely made me think of doom.
I actually really like the approach on here, the drumming isn't all that triggered, it actually sounds like a human could, and is, playing this stuff. The guitar work is varied, like I said bridging into some doomier passages now and then, but focusing mainly on bass-heavy black and death metal riffs that are really solid and dark sounding. The vocals are low and guttural, but not in a brutal death metal or goregrind way, no pig squeals on here, but really capture a similar vibe to the groups listed above. The bass isn't too discernible from the guitars, which is a bit of a let down, but it doesn't harm the album too much. Besides that, I think that these guys capture a very cool and, I hate to use this word, evil atmosphere on here, really separating them from other bands nowadays. There's also a lack of breakdowns, though by this point it's probably pretty obvious anyway, though tracks like In The Shadow of His Blasphemous Glory do stick out as having a pretty sick one.
Overall, I really liked this album, it really captures the essence of underground death metal the way very few newer groups can. What's on here isn't super original, but it's performed well and there are a few songs that really stick in my mind. If you like old-school death metal, I think you should really look into this album.
Overall Score: 8
Highlights: Desecration Eternal, Lies of The Cross, Invoking Abomination
Posted by maskofgojira at 9:12 AM