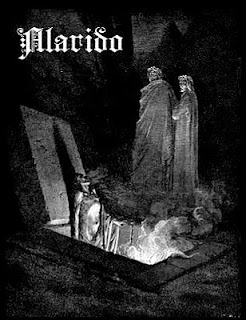 Being a largely unknown group that has recently popped up on my radar recently, Alarido caught my attention with the ambition of a single track demo. This one track consists of a nineteen minute epic that definitely shows a lot of variety and potential. In exchange for reviewing this, the band stated that they want this link to be posted as to where you can buy the album: http://ecophagyrecords.blogspot.com/.
Being only a demo, the production quality is pretty lo-fi, with drums and vocals coming out as the dominant forces on here. While it's obvious that the guitar playing recalls elements of traditional black metal as well as hints of early thrash ,crust punk, and even a bit of folk in the acoustic moments. The vocals are a bit strained at times, but otherwise work, moving from throaty howls to regular screams with ease. The guitar playing is understated on this recording, especially during it's beginning phases, only near the middle does it begin to get clearer, where you can clearly hear the different riffs.
Overall, like I already said, this is a promising debut, but still quite muddy sounding. While this isn't the most original sound out there, I could clearly hear some really cool stuff going on throughout which could lead to a more original sound later on. This is definitely a group to look out for in the future, check them out if you don't already know about them.
Overall Score: 7
Highlights: There's Only One Track
Posted by maskofgojira at 10:44 AM