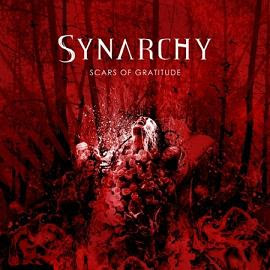 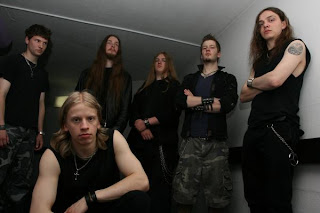 Thanks For The Memories.

Synarchy is a melodic death metal band from the Faroe Islands. For those that are unaware of the Faroe Islands, they are a group of islands in between Scotland and Iceland, the only other band that you might be familiar with that has come out from there is TYR. But on another note, since this is a debut record, influences are obviously heard throughout very clearly.
The sound on this record is very easily influenced by bands like Soilwork, Trivium, and a bit of Testament, or another similar sounding thrash band. The band remain firmly within a melodic death metal sound, most obviously in Confinement, but also have a thrash vibe to themselves as well as a very definite influence from symphonic and electronic music, but this is most notable within the keys and synthe parts. The band also have a bit of a technical edge, this is not as obvious, but they'll throw a few odd riffs and curve balls your way every once in a while.
Later tracks like Descending and the title-track, Scars of Gratitude, exhibit a bit more of a progressive side to the band. The song structures and overall musicianship on these tracks really go beyond what is shown on the album before them. These tracks also have a bit more of an atmosphere to them than others do, not that it effects the songs all that much, but the use of piano more in the background really gives the tracks a much wider sound.
Vocally, this guy has a scream similar in style to Alexi Laiho's early screams with COB. What might be more notable than this screaming similarity is the comparison that his singing has, at least with me, for those aware of the alt. rock group Three Days Grace, the singing on here sounds very similar to that. The two styles on vocals mentioned above might sound a bit odd put side by side, but it actually works in the band's favor to have a vocalist that is very clear sounding with his cleans, and very throaty screams.
The bass on this album is turned up louder than most probably would liken it to be on an album within this genre. It is by no means up in the front of the sounds, but it is clearly heard during most of the album, occasionally breaking out into it's own thing, hear The Perfect Enemy. At times this could even prove to be a bad thing, just due to the bass cutting through the guitars at some points, becoming slightly irritating, but luckily it doesn't really take away from the overall sound.
One thing that kind of brings the band down a bit is the use of some of the synthes. In most cases the keys and synthes are used to the group's benefit, hear tracks like Turning Memory and Collecting Sense, but there are a few tracks where the placement and/or choice of sound the synthe is using just hurts the song. The chorus on Keep Me Safe is almost ruined by the choice of synthe sound under the vocals. Just to mention, the keys also have their part in soloing as well as the guitars, for all the power/prog metal fans out there.
Overall, this is a decent debut record with several tracks that are hooky and have some good melodies. This surely won't top any one's lists at the end of the year, but fans of the genre will probably check this out on their own. Not the best thing, but worth at least a listen or two.
Overall Score: 6.5
Highlights: Turning Memory, Scars of Gratitude, Breaking A Dream, Place of Liberation
Posted by maskofgojira at 7:41 PM