Returning We Hear The Larks - Of Marduk EP 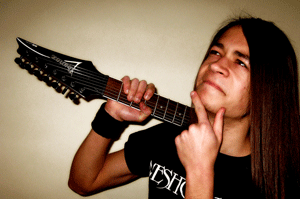 And By The Way, He Hates Vocals.

Returning We Hear The Larks is a tech metal/djent band from England founded by Jak Noble. Started back in 2005 when Jak first began recording his own music in the vein of Meshuggah, Gojira, and even Trivium after many failed band flops. Today he records and begins writing in a more identifiable style that has become his own.
The first track on this EP is called Europa. Opening with some ambient synthe work, the track then bursts into a Meshuggah-esque groove. Compared with later tracks, this could be seen as more of a teaser, being much more straightforward and simpler sounding.
The following track is Callisto, and it is immediately heavier sounding. This track is just as groovy as the last track, but features more technicality in the playing and a more progressive structure. While most of the track is heavy and technical, the ending moves into a synthe based atmospheric section that moves into the next track.
Ganymede is the third track on here. This is the longest track on this EP, being just over 7:30. In this track, more melody and atmosphere are used, especially in the latter parts of the song. While this track is the most layered and/or textured, it does not recall the same sort of vibe that Periphery does.
The final track on here is titled Io. This track begins with a melodic melody played by clean guitars. This track actually explores a bit of flamenco guitar within it's clean section. The track soon moves into a heavier direction for a little while but always keeps the clean melody.
Overall, this is a decent EP and a look into where Jak's head might go for the full-length. While this isn't the genre defying album that many people may think it is, it is far from a bad release. Maybe not your best djent release, but if you want to hear some of the newer variations of it, check this out.
Overall Score: 6
Highlights: Callisto, Io
Posted by maskofgojira at 5:40 PM