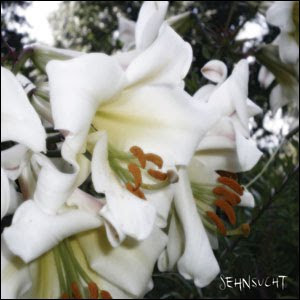 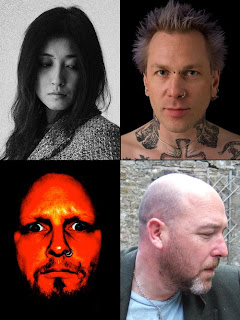 Warning! This Is Fucked Up.

Sehnsucht is an avant-garde/noise group featuring members of prominent underground groups. This album uses a lot of different sounds and soundscapes throughout it's 52 minute run. Moving from genre to genre, this covers a lot of ground, but can also feature an overall sound that is a bit annoying at times.
This group, as seen above, features Maniac (Skitliv, ex-Mayhem) on sound design, his wife Vivian Slaughter (Gallhammer) on bass and saxophone, Ingvar Magnusson (Skitliv) on guitars, and Andrew Liles (Nurse With Wound, Current 93) on FX and electronics. This collaboration, of sorts, came together when Maniac went to the UK to have Liles master the Skitlive album. Manic showed and discussed this project's eventual mastering with Liles, and eventually Liles started adding things to the sound.
By no means is this an easy record to listen to, it is very hard to penetrate and determine what exactly you are hearing in any given song. While opener Sult, is very noisy and overall sounds like someone moving through many stations in a car radio. While South of Cincinnati is kind of like a rockabilly ballad. Each track is very different from another and is not easily categorized within a single genre. Tracks seem to move from one style, say folk, to trance with almost no categorization, and then into noise again, and this can test some one's patience for something that's actually makes sense.
Industrial noise and feedback are prominent within this album. In some form or another these aspects seem to come up, whether it's a large part of the track or not. It's sometimes hard to distinguish if it's really feedback noise or if it's just an effect of the sax or a guitar, like in Tarn of Guilt.
Another thing that seems to be prominent within a lot of the tracks on this record is spoken word. Spoken word is fairly common, whether it's being distorted or manipulated, like in Cunt Queen or Good Morning Great Moloch. Weird vocals sounds also come up quite often as well, but these you can tell are from Maniac's black metal rasp.
Actual instrumentation is sometimes hard to find within every song, by this I mean the guitar, bass, and sax, but they are there. For most of the songs, instrumentation is lower in the mix than the vocals and electronics, which may prove a bit tiring to some. At some points in the record guitars have actually been sampled into the sound and then redone to make it even harder to tell what they are, but they are there.
The one track that probably stands out, most notably due to it's length is Hanging In English Garden, which is over 10 minutes. Maniac's speech is very angry, yet controlled, and express an overall hatred towards the world, addressing sex, black metal, and evil within himself. This is probably the quietest and most ambient of all the tracks on this record, but still features the industrial sounds from previous tracks as well. While being the quietest track, it is also, by far, the darkest, bringing to mind the nonsensical ramblings of a crazy man who's recalling his life, that is really the thought that comes to mind here.
Overall, this is probably not the record a lot of people may have thought this would be, but it's probably more disturbing then they thought. This record goes through indescribable thoughts within Maniac's head and puts them to "music." This isn't something I'd really recommend, but if you want to check this out to experience it for yourself, go ahead.
Overall Score: 6
Highlights: South of Cincinnati, Tarn of Guilt, Hanging In English Garden
Posted by maskofgojira at 1:14 PM